Review of Am I a Redundant Human Being?

Am I a Redundant Human Being? This question is the title of Austrian writer Mela Hartwig's early 20th-century novel – now out from Dalkey Archive Press in a translation by Kerrie Pierce – and Hartwig gives it to a relentlessly wordy, wildly contradictory, and sadistic narrator to answer. Aloisia Schmidt is a lonely young woman whose only means of holding herself together is to pit herself against herself in a masturbatory mental trial in which she plays all roles: jury, judge, defendant, and victim. She leaves little room for anyone else's interpretation – even yours. This is a one-woman show. 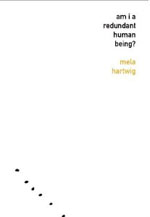 Am I a Redundant Human Being? This question is the title of Austrian writer Mela Hartwig's early 20th-century novel – now out from Dalkey Archive Press in a translation by Kerrie Pierce – and Hartwig gives it to a relentlessly wordy, wildly contradictory, and sadistic narrator to answer. Aloisia Schmidt is a lonely young woman whose only means of holding herself together is to pit herself against herself in a masturbatory mental trial in which she plays all roles: jury, judge, defendant, and victim. She leaves little room for anyone else's interpretation – even yours. This is a one-woman show.

I'm a secretary, I have nearly twelve years experience. My shorthand is first rate and I'm an excellent typist. I don't mention it to brag. I just want to show that I amount to something. I'm ambitious. I repeat: I'm ambitious. I'm hopelessly ambitious. Even though I certainly have reason enough to be humble. Reason enough to use modesty to avoid making the deficit between my talent and my ambition too obvious.

Yet Aloisia also revels in losing herself – in total erasure if possible – in books, the theater (“a place where dreams become real”) – and relationships with men. She describes the day war is declared as a blissful experience of an extinguished “I.”

Abruptly, a wave of human bodies picked me up and carried me with it, joining at the next intersection with an entire river: an excited human mass that emptied with a roar into a large basin of a plaza and halted before a pillared façade. I couldn't move, I couldn't breathe. The heat was indescribable and the sound of the countless voices deafened me. I didn't lose consciousness, but I did lose consciousness of myself. I melted into the giant body called The Mob...I could only hear the blood pounding in my ears, but all my pores felt the bacchanalian outcry that soon broke from the this thousand-headed beast: I felt as though my entire body was united in the hoarse, wild cries that now flew from my dry throat.

In those times when Aloisia can't lose herself, she tries to prove she doesn't exist. When a medical student makes known to Aloisia his unconditional love she thinks:

After all, how could anyone worthwhile be interested in anybody so worthless? Settling for me was an error. I'm tolerably pretty, I know, but what else is there to me, what? I'm laughably ignorant, fantastically unimaginative. I'm so inexplicably, so completely, so wholly unskilled that I'm utterly ashamed of myself. I'm not worthy of being loved.

She doth protest too much. Even though her self-recriminations seem painful, they are not causing her misery. They are a (necessary) form of self-soothing and they keep people – including the reader – at the distance she wants. She needs an audience – to watch, judge, or just simply to listen – and she knows how to manipulate one. Despite her exasperating contradictions, as she throws herself headlong into relationships where she tries to “utterly liquidate what remained of her old life,” she keeps you in morbid suspense.The novel isn't only solipsism. A plot develops when Aloisia encounters an acting student named Elizabeth during an intermission of a performance of Clavigo. What catches Aloisia's attention is questionable at the start. Elizabeth's:

face changed color time and again, now going pale, now turning red. She obviously had a fever, she looked downright ill. Her expression reflected some inner turmoil. Her burning eyes were riveted on the stage. Probably tuberculosis or a bad heart.

To Aloisia's astonishment she discovers that Elizabeth is acting – in her seat – moment to moment – the final scene on stage, in which the actress, having sent a letter to her lover, suffers a heart attack and dies after learning her lover has rejected her.Fascinated, Aloisia befriends Elizabeth, and the plot thickens as Elizabeth takes her “role” one step further. She sends a letter to her lover Egon Z., threatening to kill herself if he doesn't return her love – he doesn't and Elizabeth kills herself, and Aloisia reflects on Elizabeth for the first time:

It was nearly impossible to find the true Elizabeth among all the dream people hiding under her skin clamoring for existence, all wanting so badly to live in her and through her. Compared to them, she herself was the smallest and the plainest...or so I gather. Yes, even Elizabeth didn't know who Elizabeth really was but that didn't matter, the self she was looking for wasn't Elizabeth as she was, it was Elizabeth as she wanted to be: a woman capable of living and loving intensely, just the way real people are meant to live. But my God, my God, what am I saying? Am I talking about her or about me?

Elizabeth is a mirror Aloisia hopes to lose herself in, and does. She decides that: “A man who accepted such devotion as their due must indeed be worth admiring.” And so she too pursues Egon Z., becoming his secretary and submitting to his cruel treatment and also threatening to kill herself in a letter. But where Elizabeth succeeded, Aloisia fails, and out of a true feeling of responsibility, or pity, Egon Z., helps her get another job, as a secretary.Although what follows feels a little rushed, the book is an often-brilliant portrait of a woman whose self-obsession leads finally to:

Renunciation. I must simply resign myself, for I truly believe that it is my fate to have no fate at all.

Mela Hartwig, born in 1893 in Vienna, was a successful stage actress who later turned to writing fiction. She died in London in 1967.