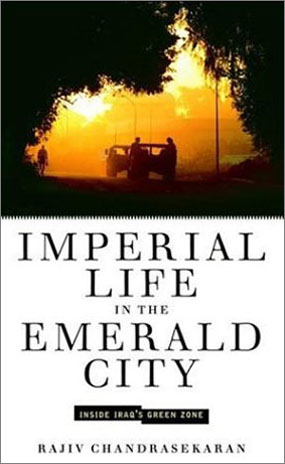 Knopf, September 2006
336 pages, $25.95
As we stare into gaping holes left in New York and New Orleans, it's hard not to draw comparisons to the hole we've burned, by our own devices, into arguably the greatest city of all time. That city is Baghdad. Rajiv Chandrasakaran's new book, Imperial Life in the Emerald City: Inside Iraq's Green Zone, is a harrowing journey into the mindset that has made post-war reconstruction of Iraq the worst human disaster of our new century.

Chandrasakaran, a Baghdad-based Washington Post reporter, focuses largely on Jerry Bremer's Coalitional Provisional Authority (CPA) and the fortress that 1,500 bureaucrats built for themselves, the 'green zone.' Few ever venture beyond the zone's 17-foot walls. They congregate in the huge cafeteria in the Republican palace, where pork-based southern fare-offensive to Islamic food preparers, but demanded by CPA leadership to boost morale-is heaped onto plates:

Halliburton hired dozens of Pakistanis to cook and serve and clean, but no Iraqis. Nobody explained why, but everyone knew. They could poison the food ....

"the Pakistanis and Indians wore white button-down shirts with black vests, black bow ties and white paper hats ... when I asked one of the Indians for French fries, he snapped: 'we have no French fries here, sir. Only freedom fries!'"

Chandrasakaran brings us out on the street to meet Iraqis who, after surviving Saddam's rule and UN sanctions, must now absorb a half-witted occupation. We stand eye to eye with a soon-to-be-murdered factory director, former soldiers, a pizza maker who sets up shop just steps from the Green Zone gates--steps no Green Zoners dare take. We see how the failing electrical grid and the absence of traffic cops contribute to resentment and rebellion as much as bigger policy disasters like liquidating the army (after promising not to), a rash act that staffed the insurgency.

At times, Chandrasakaran's telling becomes a long, hard slog. He gives extended audience to a Machiavellian control freak, Bremer, and the frustrating infighting of various American and Iraqi insiders. However, a humorous break to the bureaucratic wrangling comes when "America's Police Chief" Bernard Kerik, recruited to increase security, finds himself sharing an office with Iraqi judges:

"Oh, those are Iraqis," Gifford replied.

"What the fuck are they doing here?"

The book's most riveting moments come like a spray of gunfire: a hospital with no medical supplies trying to help hundreds of victims of a suicide bombing (while the Green Zone medical center, just a few miles away, sits unused and overstocked), or a well-lobbed mortar shattering the insular security of the Zone. In one exchange, an ill-equipped American patrol, ambushed by the Sadr army, holes up in a building waiting for reinforcements--who get lost. If you read or saw Black Hawk Down, you've seen this drill before. Have we learned anything?

Imperial Life in the Emerald City follows Anne Garrels' Naked in Baghdad as a vivid telling of the consequences of our nation's actions on everyday people caught in the crossfire. In many ways it also stands well next to the 911 Commission Report, for it documents the 'lack of imagination' that has led America down a path toward this disaster. And if it weren't a true story, it could fall in with Catch 22 and Doctor Strangelove for capturing the hysterics and folly of war management.

Unfortunately--reported as an eyewitness account, with astonishing detail and clarity--it is all true, and it is horrifying. To paraphrase William Carlos Williams, take hold of the ceramic plates in your flak vests, ladies. We are going through hell.

Rajiv Chandrasekaran is an assistant managing editor of The Washington Post, where he has worked since 1994. He previously served the Post as a bureau chief in Baghdad, Cairo, and Southeast Asia, and as a correspondent covering the war in Afghanistan. He recently completed a term as journalist-in-residence at the International Reporting Project at the Johns Hopkins School for Advanced International Studies, and was a public policy scholar at the Woodrow Wilson International Center. He lives in Washington, D.C..

Frank Haberle's stories have appeared in recent editions of the Adirondack Review, the Melic Review, Johnny America, Smokelong Quarterly, the SNReview, the East Hampton Star, and the City Writers Review. Frank works for Community Resource Exchange in New York City. He is a Board member of the NY Writers Coalition, a nonprofit group providing creative writing opportunities for disenfranchised New Yorkers.