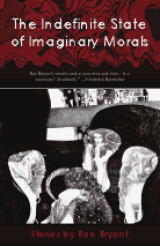 Rae Bryant's The Indefinite State of Imaginary Morals (Patasola Press) is a book about love and sex, but that description is the only one that will make Morals seem typical. Bryant has a unique curiosity with the tools and the products of human relationships—naked bodies, bodily fluids, human (and other) odors—and the selfish animal instincts that haunt lovers in private moments. In her world, such surface material gets in the way of connections—Bryant's women can't get through to their partners because their cystic skin, dumpster funk, and bald heads get in the way. Such barriers make loving another pile of skin and blood and bodily functions a tortured choice, that Bryant throws into relief by designing Kafkaesque fantasy worlds where women are puppets and men are fashioned from sugar and butter. To Bryant, any suitable lover is by necessity a product of fantasy—the alternative is too fleshy and real for love. The lovers who inhabit Bryant's fantasy worlds gain a strange sort of agency. A father and son custom-build women to fulfill outlandish sexual needs, a women stores a doting lover (who she tickles and lets lick her fingers when she is lonely) in her closet. At her best, in stories like “Monk Man and Moonshine,” Bryant mines the complexities of such control when it comes to love and sex. “Monk Man's” young rural protagonist, kissed by a drunken relative, realizes that to become his fantasy lover, to submit, is in part her own choice, and may even be a path to freedom. But is it worth the cost? While there are some full-fledged short stories in Morals; most pieces are a flash-fiction-esque, between one and three pages long. There is also a long middle section in which Bryant defaces Klimt paintings of naked women, a suitable centerpiece. All told, the constant novelty of story formats, subjects, and lengths lends to the feeling that the book is more of an individual stream of consciousness than a set of discreet stories about real people. Bryant's writing style is also conducive to her theme—she's confident and graphic, and Morals reads like she is sucking a peach pit dry of every flavor, even the bad ones. Such immediate language admirably keeps the pages turning despite Bryant's deeply experimental approach and lack of controlling characters or plot lines. The second-to-last story and final long piece in Morals, “Cow Tipping,” is a curious portrait of a group of cartoonishly-chauvinist white men who toy with the idea of inviting a new black neighbor to their poker game. They never really intend to move forward. There is much less of the graphic sex or blood or drowning that characterizes much of the Morals in “Cow Tipping,” but the story sets the problem of control in stark relief. In choosing to exclude their neighbor, are these men asserting their collective choice or are they relinquishing it to fear, peer pressure, and social norms?All of Bryant's characters have the same tortured freedom as the men in “Cow Tipping.” It's a freedom that arises from the fundamental isolation of being human, and it can glamorize evil, inspire dramatic self-destruction, or simply paralyze people into bored domesticity. There is little comfort in such empowerment, but it may be painfully recognizable. Some readers will find themselves wanting a more traditional novel set in Bryant's singular world rather than the herky-jerky head-trip of Morals, and that is understandable. Still, this is a chance to get an early look at a writer with vision and talent that bodes well for the future. Rae Bryant's stories have appeared in BLIP Magazine (formerly Mississippi Review), Opium Magazine, and PANK, among other publications, and have been nominated and short-listed for ‘Best of,' StorySouth Million Writers, and Lorian Hemingway Short Story awards. She has work forthcoming in Story Quarterly, Puerto del Sol, and Gargoyle Magazine among other journals. Rae has received Fellowships from the VCCA and Johns Hopkins University, where she earned a Masters in Writing and the Outstanding Graduate Award. She is the founding editor of Moon Milk Review, a nonprofit print and online literary and arts journal.