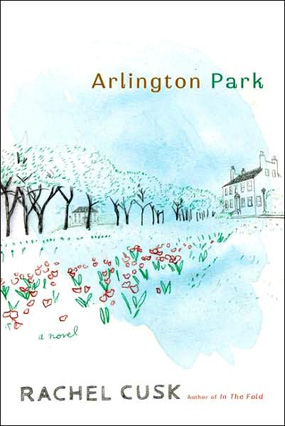 Farrar, Straus, and Giroux, January 2007
256 pages, $23.00
The bland nature of Arlington Park's opening line, "All night the rain fell ...", is a demand for innovation. Paradoxically, by employing cliché, Rachel Cusk calls to mind a genuine need to break through banalities in order to reach what is real. Unfortunately, the phrase creates a need the novel never satisfies. Her characters-Juliet, Amanda, Solly, Maisie, and Christine-never manage to cut through the surface of their perfect worlds in order to feel something.

One of the ways Cusk succeeds in surpassing this banality is through her use of bodies to portray the women's emotions. When Juliet cuts off her waist-length hair, she is also severing emotional ties to her husband, who is inextricably linked to the sadness in her life. Amanda's trip to the butcher is especially striking: when her son makes a comment about the butcher's misshapen arms, Amanda realizes her son forces her to face the meaninglessness of life several times a day.

When their bodies don't serve as representations of their emotion, their surroundings do. For Solly it is her spare room. The girls who rent it make her feel like a failure. She finds out that Betty, the Taiwanese student, never shared her real name with her. "After Betty came Katzmi, a whey-faced, doleful Japanese girl with English so primitive that Solly continually found herself at the edge, at the very limit of her own civilized self, vacillating there as though on the perimeter of a vast darkness."

The last tenant, with her beautiful scent and seeming purity, reminds Solly that she has become distanced from her own femininity. For Maisie, it is the rooms in her house and the people who reside in them. Thinking about the kitchen, she comments, "The room, the house, even Arlington Park itself, increasingly wore for her the lineaments of a lived past into which future possibilities were unable to intrude ..."

At the end of the book, when the couples of Arlington Park get together for dinner at Christine's house, the women are overly dramatic. Christine, thinking about the aspects of her life she should appreciate, says to Maisie, "you looked like you thought that world was about to end." Maisie responds, "Sometimes I think it already has." Although these musings about female existence seem to be attempting to raise the book above chick-lit, they fall into the trappings of melodrama.
Cusk treads on the periphery of raw emotion, but never seems to reach its depths. Her characters fail to follow the example of the lonely housewife in Michael Cunningham's Hours, who takes refuge in a hotel room where she can create space to experience life. In never leaving their worlds, the residents of Arlington Park isolate themselves from experience, and risk isolating the reader from Arlington Park.

Rachel Cusk was born in Canada in 1967. She read English at New College, Oxford, and has travelled extensively in Spain and Central America. She is the author of four novels. The first, Saving Agnes (1993), won the Whitbread First Novel Award. A Life's Work: On Becoming a Mother (2001), is a personal exploration of motherhood. In The Lucky Ones (2003), she uses a series of five narratives, loosely linked by the experience of parenthood, to write of life's transformations.