Eric Felipe-Barkin is a working filmmaker, writer, illustrator and published translator. He holds an M.F.A. from Columbia University's fiction program and regularly staffs the sundry camera departments of New York City's commercial film industry. He is currently at work on no less than twenty western short films, a Sunday comic series based on the work of Winsor McKay and something else by the time you read this.His work can be seen at http://ericfelipebarkin.wordpress.com/.

If you're our age and into fiction you have to act like there's a lot of new stuff out there to know about – secret, underground literary things that are making things new again. There isn't. It's no one's fault. 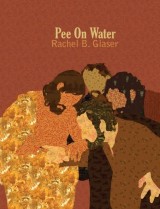 If you're our age and into fiction you have to act like there's a lot of new stuff out there to know about – secret, underground literary things that are making things new again. There isn't. It's no one's fault.Rachel B. Glaser's Pee On Water is a work of contemporary short fiction and as such bears all of the mixed blessings of its age. Pee explores complexities of intimacy as well as any of the best yarns going today do. Its sentences are punchy and literary. They stand in interesting contrast to one another, unique and often funny things in cornfield rows. They make for good Gordon Lish exercises, and, I'm sure, would pass easily through his rigorous program. Really, Pee hits all the bases literary fiction is supposed to hit, but that isn't what makes it good. In fact, it's what holds the collection back.Case in point: “The Totems Are Grand." The story is a meditation on a family's grieving for a dying grandmother. Its members pass through increasingly strange and arcane rites, building increasingly strange and arcane totems to mourn/cope with the grandmother's coming loss. They get big and weird.

Frankie added a sports part with a carved football and hockey puck, including an actual baseball bat nailed on. I wrote a poem in Sharpie...My mother finished a carving of Grandma while my mom sawed out a representation of God.

The image of the totems is similar enough to others we've seen in Aimee Bender and others' work: coy, surreal sleight-of-hand stuff that looks sideways at charged emotional situations so as to avoid becoming too sentimental or melodramatic. The problem with this approach is that it's already a received gesture, and, like sentimentality, gets in the way—which for “Totems” is a damned shame. At its heart, the story is really about that awful, guilty feeling of boredom that creeps up on you when someone you love is about to die. Death, we expect, is supposed to be full of narrative resolution. Meaning is supposed to crystallize, our loved ones' lives and purposes made clear. But ultimately, when you're sitting by someone's hospital bed the sadness is exhausting; eventually you just want to know what's on T.V.There are strong passages in “Totems” that get at precisely that—

Grandma's earlier style of dying turned into a more advanced, un-stylish way of dying. We took turns waiting with her. ‘I'm not sure which I'm more attracted to,' I said to her, ‘boys or dogs.' She was only ten percent awake.

—but they get lost in the overwhelming noise of the story's central symbolic imagery and artifice.But there are some pieces in Pee where Glaser seems to tread familiar ground, seems like she's just getting conventionally literary, and then turns in some unanticipated direction. Possibilities explode. This is her best stuff and the turns are her strongest asset as a writer. The collection has at least two entries that manage to do that in a truly exemplary way: “The Jon Lennin Xperience” and “The Monkey Handler.” I only have time to talk about one, so hang “The Monkey” for now.“Lennin” follows Jason: a shy, sensitive, anxiety-riddled shut-in living off his wealthy sister's money in a vaguely futuristic present where virtual reality video gaming has advanced into a kind experiential art. As it progresses, he finds himself increasingly consumed with a bootleg John Lennon simulator, The Jon Lennin Xperience, where he gets to blow off sold-out shows to walk the docks and, in more advanced levels, slow grind Yoko Ono through sex missions.At first crank the story appears to be a send up of celebrity-fueled tech culture. Rather than let “Lennin” go as a simple lampoon job, though, Glaser treats her subject matter with more emotional rigor and follows it to its logical emotional end. She unrolls a story about fear of failure in the real world and the ultimately self-destructive embrace of fantasy-as-escape that usually follows.

Jon spent whole days with photographers and was interviewed...There were button combinations for everything. Jason opened a beer, made the peace sign, cleaned his glasses...dined with celebrities. Jason helped Jon eat the food and then paused it to eat a rushed meal of rice and ketchup.

As Jason spends more time as Jon, you can't help but feel sympathy build. Glaser paces the piece well and drops in plenty of humanizing details. Jason notices that Yoko Ono looks like a catfish and, unable to help himself, talks about catfish to her mid-coitus.Capping the whole thing off, though, is the piece's masterstroke. In the final level of The Xperience Jason is snapped out of Jon Lennin's perspective into that of his killer's. The killer is the flattest character imaginable. He has only two actions available to him: walk and shoot. He has loads of Beatles albums, but no way to play them. His bedroom and starting location is vague and non-descript. “Who is this asshole?” the story literally asks.

He had never played a more twisted game. Why couldn't he stay as Jon? He'd rather get shot than shoot. He'd definitely rather that. He considered quitting. He was at the very end, and the very end was so fucked up, it wasn't like being a soundman for one level, for a concert level, this was chilly and dark.

Jason avoids hunting down Lennin, stalling to shoot up various objects in the killer's room, but the game impels him forward and eventually he ends it.It's an unexpected twist on a familiar trope. Narratives about escapism into art abound—think Willa Cather's “Paul's Case” or Don Quixote—but those end with the dramatic demise of their principle characters: their protagonists are ultimately too X, Y or Z to live in the real world. “Lennin,” by contrast, forces Jason back into reality to meet with a far more honest ending: he has to go on with his shitty life and will eventually forget whatever effects his communion with The Xperience had, except maybe now and then.Throughout Pee, Glaser demonstrates obvious talent, and there's profound sentiment in most everything she does. Whether she and Pee are good is not at question at all. Glaser has all the makings of tremendous writer, and the jump to the next level for her is mostly a question of shedding contrivances. I'd like to think that, being pretty young, she will drop those in due time, no doubt. But I couldn't say for sure. A lot of very good and celebrated authors, much further along in their careers, suffer similar problems and seem to gather more praise as they retreat further and further into pantomime acts. There's just no critical pressure against it. We've lazily accepted a certain quality of “literary writing” as permanently cutting-edge and it's gotten to be something that we ape towards rather than actually achieve. That quality is being corralled through MFA programs and grinded through small and specialty imprint publishing houses.This literary product is, at the very least, I suppose, brave—if not making much money can be thought of as heroic. In either case, its not all that new and not all that challenging. It only bears the branding. We are reading under a thick blanket of avant-garde sameness and haven't been particularly willing to recognize it. Rachel Glaser hasn't gotten herself all the way out, but at least she has a couple ankles sticking from under the covers and strong legs for kicking. I look forward to seeing her outside.Rachel B. Glaser lives in Massachusetts. She blogs at http://rachelbglaser.blogspot.com/.

Eric Felipe-Barkin is a working filmmaker, writer, illustrator and published translator. He holds an M.F.A. from Columbia University's fiction program and regularly staffs the sundry camera departments of New York City's commercial film industry. He is currently at work on no less than twenty western short films, a Sunday comic series based on the work of Winsor McKay and something else by the time you read this.His work can be seen at http://ericfelipebarkin.wordpress.com/.