Paul Barrett's AMERICAN ISLAM: THE STRUGGLE FOR THE SOUL OF A RELIGION 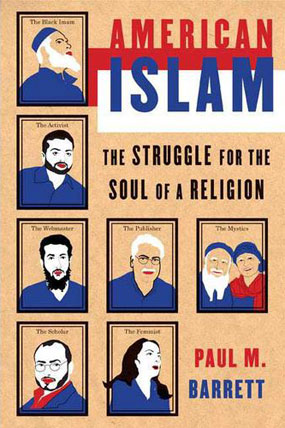 Farrar, Straus and Giroux, December 2006
320 pages, $25.00
If the soul of religion, any religion, can be imposed from the top down, more than Islam is in trouble. A seasoned reporter for the Wall Street Journal, Paul M. Barrett has written a book following the lives of seven prominent American-Muslims (or Muslim-Americans). American Islam is well-written, well-researched, insightful and passionate. In sum, professional. It also has almost nothing to do with the worship of the divine or the service of State.

Everything is politics. Barrett delves into the lives of an activist, a feminist-journalist, a newspaper publisher, a Sufi mystic, a black Brooklyn Imam, a webmaster (Sami Omar al-Hussayen, whom the government attempted to imprison on charges of terrorism), and a scholar and public intellectual (the occasionally brilliant Khaled Abou Al Fadl). As his subjects lead congregations, publish broadsides and polemics, write books and newspaper and magazine articles, Barrett notes the tensions prevailing: between America as America, as Mammon, essentially, and the fundamentalist Muslim world, in which all infidels will one day be converted, or killed.

On the surface, so much of the book is right: the thorough reportage, the efficient scene-setting, Barrett's marvelous eye for the backyard detail and his excellent ear - skeptical at all soundings of official rhetoric, whether of radical Sheikhs or the office of the Attorney General. But there's also something wrong. Writing a book about American Islam featuring the cast of characters that Barrett has assembled is much like writing a book about Christianity in America and populating it exclusively with a televangelist preacher, a transsexual "nun," a born-again rock star and, perhaps, President George W. Bush. Needless to say, these are not representative lives. Extremism, and evil, are the same across the divides of every religion, no matter its "soul." Demagoguery is always demagoguery and only the theology differs. It's easy to say the following, and yet true: I have learned more, and more deeply, about Islam as it's lived in America from a few hours spent with the Jordanian on my corner than from reading this book, and Abdul often throws in a beer or bagel for free.

At least one troubling aspect of Barrett's book isn't his fault. The most secular, flag-waving Muslims here seem to regard America as a business decision. They remain loyal to the economics of their assimilation and yet fanatically aloof from the Lex that provides. In the margins, though, there seems to spark a strange hope-a metaphysical, spiritual, soulful hope to be paid for in blood (not "ours" or "theirs," but everyone's). As they've been lately hassled and imprisoned, detained and beaten, hounded and confined and investigated-many Muslims here are being turned, reluctantly it seems, as if in some sort of sour reward for their success, into what lately, and lamentably, passes for honest Americans: people committed to living freely, communally involved; made skeptical of their government, mistrustful of power.

Paul Barrett is the director of the investigative reporting team at BusinessWeek. He is the author of The Good Black: A True Story of Race in America.

Joshua Cohen was born in Southern New Jersey in 1980. He is the author of The Quorum (Twisted Spoon Press, 2005), and the forthcoming Cadenza for the Schneidermann Violin Concerto (Fugue State Press, Summer 2006). A translator and editor of BLATT (http://blatt-blatt.blogspot.com), Cohen's essays appear regularly in The Forward. He lives in Brooklyn, NY.