OUT OF THE DUST by Klaus Merz. Translated by Marc Vincenz.

Stacy Skolnik lives in Brooklyn and works in publishing in NYC. You can find some of her work on various websites such as Josephine Quarterly, The Poet in New York, Red Fez Press, and The Caterpillar Chronicles. 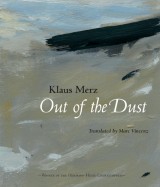 Out of the Dust (Spuyten Duyvil Press), a collection of poetry recently translated from German, offers the reader a series of stark and often surprisingly unsettling glances through the eyes of the Swiss poet, Klaus Merz. Though something is almost always inevitably lost in the translation of poetry, one can take comfort in the fact that this collection was converted to English by veteran translator Marc Vincenz, who has had several collections of his own poetry published. This slim volume, with its sharp, brief poems, tackles the big stuff; mortality, time, relationships, and the transitory nature of life, all in only in a few words per poem. While the fleeting quality of many of Merz's poems can be jarring at first, by the end of the collection the reader becomes accustomed to his style and brevity. These poems are supposed to be fleeting; starting and finishing within a moment. These poems mirror the transitory nature of life in its grand scheme. For example, take the poem "Happy Days":

Many of these poems are no longer than a sentence, but Merz makes it clear that a short statement can still say something big. And sometimes not saying something actually says the most. Many of these poems share something of a kinship with the notorious Hemingway-attributed 'six-word novel.' Take, for example, this eight word poem titled "Three Short Stories":

Merz acts as a reporter, relaying to us brief snapshots of particular moments in time. He is an unbiased observer, yet somehow the distance between him and the thing that he is witnessing actually highlights the situation's hopelessness. In Out of the Dust, the poems that stand out the most are the ones in which Merz does involve himself in the brief narrative; poems that possess an “I” or a “me.” These more personal poems make for a pleasant surprise among all of the objective, observational pieces. However, Merz doesn't seem primarily concerned with emotionally involving his readers in each individual poem. It seems that his foremost interest lies in bringing light to the metaphysical shadow that is cast on all of these poems as a whole. It is the same shadow that is cast on every one of our lives. We are all very aware of our mortality, and Merz's message is clear: Life is short; pay attention to the details.Klaus Merz was born in 1945 in Aarau, Switzerland. He has published twenty volumes of poetry and numerous works of fiction, most notably the short story collection Adams Kostím (2001) and the novellas Jakob schlíft (Sleeping Jack, 1997) and Der Argentinier (The Argentine, 2009). Klaus Merz has been awarded many prestigious prizes, including the Hermann-Hesse-Literaturpreis in 1997, the Gottfried Keller-Preis in 2004, the Werkpreis der Schweizerischen Schillerstiftung in 2005 and, most recently, the Basler Lyrikpreis and the Há¶lderlinpreis in 2012. His most recent collection of poems is Unerwarteter Verlauf (Unexpected Course) (Haymon Verlag, 2014).

Stacy Skolnik lives in Brooklyn and works in publishing in NYC. You can find some of her work on various websites such as Josephine Quarterly, The Poet in New York, Red Fez Press, and The Caterpillar Chronicles.