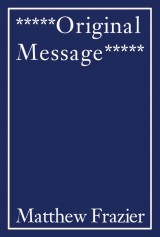 *****Original Message***** (Hunt & Light) exists precisely at the place where people write forlorn Facebook statuses instead of diary entries. The title, stylized with five asterisks on either end, suggests an email thread—a representation of new definitions words have taken on in the past two decades or so. Using this as a setting, Matthew Frazier writes about everything that hasn't changed at all: anxiety, obsession, regret. Ambitiously, Frazier aims to write poetry for our modern times—including, even, references to tech and geek culture. One poem is called “Storm's End,” the name of a fictional castle in George R.R. Martin's fantasy world of Westeros. Another goes by “Analysis Paralysis,” which is the term board-gamers use to poke fun at people who take overlong turns. In one poem, he writes about a man listening to the Dave Matthews Band. Frazier tries to engage these poems with subjects that high literature habitually ignores in order to lend those things beauty. Though he could have explored these connections more deeply, it is perhaps for the best that he didn't include any poems about Game of Thrones.I'll admit that I was initially nervous while looking over the table of contents. A less skilled poet might've tripped over what Frazier attempts here, but he manages to stay in control throughout. While the poetry sometimes over-exerts itself, it just as often hits a graceful note. Here:

"She laughed at me with an ellipsis./ I thought they were her hips./ 'I don't dance.' She said,/'Come dance with me.'"

This stanza is startling in its simple beauty. Images ought to have weight to them—a certain thickness and texture. They can exist without an adjective in sight and retain the clarity of a photograph. When these moments swoop in, they manage to lift me out of my chair. Lines like this riddle the collection.The book lingers on the new mundane, and every movement the poetry makes is accessible and immediate. It's not a small feat to write poetry about the information age that doesn't seem cute or thickly layered with irony. Text messaging and the internet don't have to be written about in a totally self-conscious way. Even a poem that's structured to look like an email chain seems outside pretense.I can't say the collection is perfect, but I'm standing in its corner anyway. There are missteps: brief moments where you might confuse the book with a masters' thesis, metaphors that feel like slack on an otherwise tight line (one, comparing the moon to a “vanquished pinnacle,” left me scratching my head), and some unwarranted sentimentality, but, when it isn't even trying, it really can move. Matthew Frazier wrote his first poem while doing the dishes in 1993. He studied with Joyce Garvin and with Marvin Bell at the University of Iowa Writer's workshop. His first collection of poems, ***** Original Message *****, will be published in the spring of 2013. Frazier currently lives in New Paltz, NY with his wife Kimberly, a Puli, two cats and two birds. He takes frequent trips to the office in Jersey City, NJ.