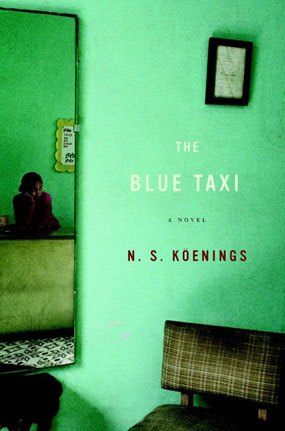 Little, Brown, October 2006, 400 pages, $23.99Women's Liberation, Black Power, Chicano Pride, Gay Pride: the 1970s in America were characterized by sexual revolution and cultural change, marginalized groups forcefully identifying and defining themselves-a brash decade of "this is who I am." Perhaps that is why, for this American reader, N.S. Ká¶enings's The Blue Taxi-set in the very same decade-is such a strange, quiet, and seemingly naá¯ve affair.
The action begins with Belgian-born Sarie Turner and her daughter Agatha witnessing an accident-a young Indian boy struck by a drunk driver. Sarie jumps to his side; Agatha ties the shoe on his severed foot. That Sarie later wants to go to the boy's home to check on him would seem understandable. However, in this bustling small town in newly independent East Africa, no interaction between a white woman and an Indian Muslim family is simple or understandable, least of all to the characters themselves. Upon hearing her intentions to visit the boy, Sarie's clueless husband, Gilbert, an unemployed, left-behind British colonialist, replies, "Muslims won't consort with any likes of us, my dear...whatever will you do if they should want you first of all to be unshod of your shoes and leave them in the hallway?"
But Sarie makes up her mind to visit the boy. Nisreen, the receptionist at the local clinic, hesitates before revealing his whereabouts because the boy's father is "Mad Majid Jeevanjee," the town eccentric who is rumored to be violent and crazy. Nisreen tries to protect Sarie, and is "not at all concerned that this ungainly woman would not know where to store her shoes, or that she might reach out for a biscuit with an unsuitable left hand...yellow hair and naked arms aside, Nisreen was definitely not protecting Jeevanjees from Sarie." But Sarie interprets Nisreen's hesitation as censure. Communication stifled by etiquette, unfamiliarity, and centuries of misinformation is at the heart of this novel, and of each interaction. Within the novel's framework, Sarie and Majid do meet, and meet again.

Yes-big, awkward, married Sarie Turner and "Mad" Majid Ghulam Jeevanjee, the poet and small, grieving widower, begin a courtship: a true, slow, blushing courtship that burgeons into an unlikely love affair. Well, unlikely on the surface. Because what is unlikely, really, about two isolated people who wish to be noticed, who know there is more to them than what people see, and who find something in each other that makes them feel more alive? The only unlikely element is the collision that brings Sarie and Majid together.While the narrative plods at times, The Blue Taxi displays a real love of language and insight into the orchestrations of the mind. There is an understanding of the changing realities of post-independence Africa, and perhaps the novel's greatest strength is that it transmits this understanding through the characters' thoughts and actions. The fleeting moments in the unremarkable lives of a wide cast of characters in a small East African town bring into relief the larger history of a world in flux.

As both Sarie and Majid transform, their worlds widen. Everything changes and yet nothing does; things that were briefly in sharp focus become background in the everyday snapshot. There is disappointment in that, but also hope, and The Blue Taxi captures this precisely.

N.S. Ká¶enings holds a BA in African studies from Bryn Mawr College and a PhD in sociocultural anthropology from Indiana University, where she completed her MFA in fiction. She has lived in East Africa and Europe. She is currently teaching at Hampshire College, in Massachusetts. Her short stories have appeared in Story Quarterly and Glimmer Train, and her novella Setting Up Shop was released as a chapbook by the White Eagle Coffee Store Press in 2004.

Ruchi Mital lives in Brooklyn, NY, where she can be found scribbling on various flat surfaces. In Sanskrit her name means "an interest", and aptly so. She is interested. In all of it. Top interests include the dance, discoball theories, scenarios, and epic bike adventures. Ruchi's words have appeared in A Gathering of the Tribes, and, of course, on many of the world's flat surfaces.