NOW WE WILL BE HAPPY by Amina Gautier 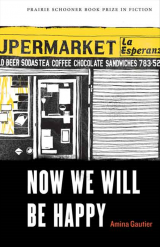 Now We Will Be Happy (University of Nebraska Press, 2014) announces in its title the doom of its characters, for of course no such declaration can possibly be fulfilled. Amina Gautier builds on her previous book, At-Risk (University of Georgia Press, 2011), with this new collection of linked stories about the Puerto Rican diaspora in the Northeastern United States, tenderly probing the hopes and disappointments of the immigrant experience over several generations.The stories build on each other until they have constructed a complete view of the world of Puerto Rican experience in the US, returning again and again not only to the same characters but to the same issues, with even the same soundtrack of boleros playing across the stories. The music, as well as the food (flan, arroz con gandules and tostones) and the religious rituals of santeria, acts as a tether to Puerto Rico from the mainland. In "Bodega", it even draws back the Puerto-Rican born son of Brooklyn deli owners Nelida and her husband, who left San Juan specifically to give their only child a chance of a better life. But what is 'better', their son seems to ask, and why must it be found in New York City and the states? Turning his back on the sacrifice his parents have made, he leaves his young son behind with his parents and returns to Puerto Rico, scuttling the entire purpose of their abandonment of home. While in the title story, the food, music and even language are mysteries for American-born Rosa, raised apart from the cultural traditions of her parents, who do not cook Puerto Rican food at home or teach her Spanish. Considered inauthentic by her abusive husband, Pedro, Rosa takes a lover, Yauba, who inducts her into the mysteries she's been locked out of, teaching her how to cook authentic recipes and playing her the songs of El Jibarito. Music proves the only link for another member of the most Americanized generation, who connects to her grandfather through his love of traditional salsa, a love he seems to lack for his ex-wife and the children of their marriage. Women and men struggle in different ways in this world; Gautier's female characters seem to have fewer options in how they react to their situation, however. While their husbands and sons may choose to leave them or to return to Puerto Rico if they are dissatisfied, the women are left to pick up the responsibilities that have been abandoned. In "A Wish, Like a Candle, Burns", Lydia turns to strategically chosen santeria candles as her outlet for her frustrations and her hopes in her relationship with Miguel. When she ultimately realizes that they offer a false promise, that he already seems to be lost to her, it is unclear what can replace them. For Lydia, as for Gautier's other characters, there is no magic spell or action that can bring their happiness near, and migration does not seem to have brought it any closer. As described in this collection, it is both a very particular dilemma, strongly rooted in Afro-Puerto Rican identity, but it is also familiar from lives the world over, yearning for everything to work out perfectly and finding perfection a distant dream. It's only too bad that the characters who are revisited several times across the collection couldn't be given even more time to develop their stories in greater depth, instead of merely passing by.Amina Gautier teaches in the department of English at the University of Miami. She is a winner of the Flannery O'Connor Award for Short Fiction. Her work has appeared in numerous literary journals, including Antioch Review, Glimmer Train, Iowa Review, Kenyon Review, and Southern Review.