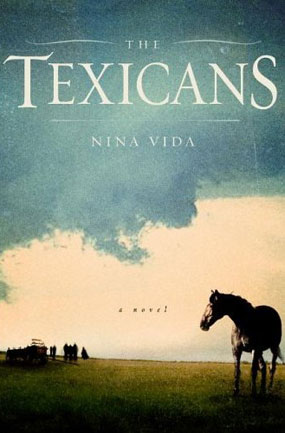 Soho Press, October 1, 2006, 304 pages, $23.00In The Texicans, Nina Vida combines reverent tones of magical realism with the brutality of a Cormac McCarthy novel to create a captivating and original vision of the Texas frontier circa 1845. John Wayne might have had a bone to pick with Vida about her choice of protagonists -- Jews, Mexicans, Indians, black slaves, and Alsatian immigrants all carry far greater moral gravity than the good ol' boy Texas rangers, who Vida paints as little more than a man-sized breed of vulture.

Joseph Kimmel, a Polish-born Jewish teacher, living in Independence, Missouri, heads out on horseback to San Antonio to claim what's left of his late brother Isaac's business. Along the way, he saves a wounded runaway slave named Luck. When Luck steals Joseph's horse, and he decides to continue on foot, we get the first glimpse of Joseph's ability to draw a thick blind of stoicism over any inner sadness or anger; he even manages to seem dispassionate when doing something kind. Vida perfectly taps the tension between Joseph's outer calm and inner disquiet; we are riveted waiting for Joseph to bubble over.

Eventually, Joseph wanders into the newly founded town of Castroville, TX, where fate, and then marriage, tie him to Katrin, a lonely Alsatian girl. Then a group of Rangers show up with Luck tied and bound. Once again, Joseph's stubborn kindness overrides his reticence, and he saves Luck from lynching by claiming him. The threesome hits the road for a fresh start, "somewhere out there," in the wilds of Texas's Guadalupe Mountains. Along the way they hook up with Aurelia, a magic-touched Mexican-Texan (hence, Texican) woman. With her mixed ancestry, her ability to pass among Indian, Mexican, and Anglo societies, and her aura of longing and foreboding, Aurelia embodies the range of magical and threatening possibilities that Texas represents to Joseph. She casts a spell, or a fever, on Joseph. By not succumbing to the fever, Joseph becomes stronger. He is inured to Aurelia's magic, and the spell of violence that has infected the minds of most Texas men; and he is inoculated against, if not numb to, the cruelties he will inevitably confront from lurking Texas Rangers (the ones with guns, not baseball bats) and Indians thirsty for blood and revenge.

Ultimately, it is Joseph's new toughness, combined with his sparse extroversions, that Vida sells as the genuine article of Texan-ness. The whites and Indians around Joseph wallow in wanton violence and spittoon-staining simplicity as their worlds wither and die. All the while, he goes about building a small empire. But Vida, a writer with a strong romantic streak, refuses to let Joseph find fulfillment without love.

Like a wagon ride above the thin rim of a bottomless canyon, The Texicans threatens the reader with unexpected twists and unrelenting suspense. Vida brings the reader from the horrors of a cannibalistic ritual to the comforting banality of fresh-baked bread without ever slackening the reigns on her story.

Nina Vida is the author of six previous novels. She lives in Huntington Beach, California.

Jonathan Lachance holds a B.A . in English and a masters degree in urban planning, but he's all about fiction. He recently completed a first novel, Heirs of Eminence, and is hard at work on his second. He has published articles on urban planning in Progressive Planner magazine. When he's not glassy-eyed in front of a computer, there's a good chance he's reading something by Murakami or Chandler or practicing Yiddish with his bubbe. He lives in Brooklyn. Contact Jonathan@kgbbar.com. nina_vida_s_the.