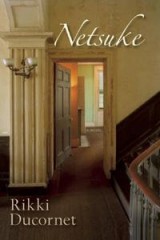 Netsuke (Coffee House Press) opens with a loathsome scene of debauched lust, and from there goes further and further down the rabbit hole into the twisted wonderland of the narrator's mind. But do not turn away from the dark, because what Rikki Ducornet has managed with this little book is quite startling. In a fierce demonstration of her wicked smarts and keen understanding of power and frailty, she has taken a reprehensible character and made him someone, if not worth rooting for, then at least worthy of compassion.The story revolves around a psychoanalyst who, for years, has been sleeping with his patients. With a tight-fisted obsession, he has convinced himself that this is for the patient's own good. It is not with all the patients that he chooses to coital, only those with a specific vulnerability. They are divided, separated strictly, as is much of the novel. If Ducornet has a persistent framework, it's dichotomies. Or more specifically, she writes about the messy gray areas where dichotomies begin to overlap. Netsuke, for instance, takes place in the months when the Pscyhoanalysts two worlds begin, for the first time, to overlap.For years, the Psychoanalyst has kept his world carefully divided into two parts, which he has come to refer to as "Drears" and "Spells." Drears and Spells are as much ideas as actual places. Drears, for instance, is the office where he treats the patients he will never sleep with; where he goes home to his wife, eats dinner with his wife, has sex with his wife, and remains as devoted as a husband can remain. As Ducornet's narrator describes, “Spells is the theater where my clients and I break all the rules.” Here, the Psychoanalyst ”fucks” his patients. He has lurid affairs so that, he has convinced himself, he may “heal them” or "help" them. In Spells, every savage desire may be realized. The world may be everything morality reels against: adultery, lust, greed, obsession, a coercion of the weak, and all because of the Psychoanalyst's atrocious pretense that animalistic passion has curative powers.But a book about the abuses of power doesn't interest Ducornet nearly as much as the vertices of power. Over the course of the novel, who has the power, how they will use it, and to what end, flips and flops and eventually tears the house down. It is a powerful adventure, and one must applaud the enormous risk Ducornet took in embarking on a novel of this type. The unlikeable and unreliable narrator is nothing new to the literary scene. Authors like Poe made an art of the detestable in stories like “The Cask of Amontillado” and “The Tell-Tale Heart”. Dickens brought us the cantankerous but redeemable Scrooge. American Psycho, The History of Luminous Motion, Fight Club, and the list goes on. But few manage a character like Ducornet's, whose depravement is of a distinctly modern and innocuous type. The Psychoanalyst is not a murderer. He has not embezzled money or blown-up buildings. His violence is quiet; difficult to detect. And he knows it.What saves this novel from being a cold and claustrophobic trip into the mind of a sociopath, is his desire to be found out. Every interaction with his wife, every move from Spells to Drears and back again, is laced with guilt, a particular brand of guilt you cannot help but identify with. This novel is the psychological mess that ensues when one becomes aware of the wrongs one is committing, and yet continues to commit them. Ducornet's body of work is stunning in this way. The reprehensible, the outlandish, the dogmatic and severe, under her careful pen these qualities unfurl so that we might examine them without feeling threatened or ignoble, so that we might slide them under the microscope and learn a thing or two about ourselves.Netsuke is a testament to Ducornet's ever evolving, ever relevant, and simply compelling ability to tell a story. It's well-suited for this era so defined by its shades of gray. While not a perfect work, it is perfect for this moment in American culture.The author of eight novels as well as collections of short stories, essays, and poems, Rikki Ducornet has been a finalist for the National Book Critics Circle Award, honored twice by the Lannan Foundation, and the recipient of an Academy Award in Literature. Widely published abroad, Ducornet is also a painter who exhibits internationally. She lives in Port Townsend, Washington.