Miranda July's NO ONE BELONGS HERE MORE THAN YOU 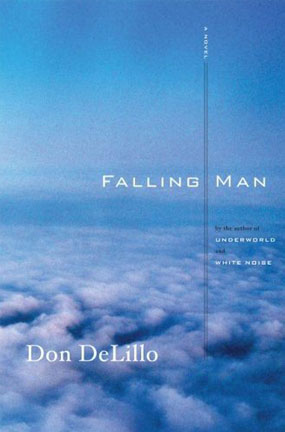 Scribner, May 2007
256 pages, $26.00
"All plots tend to move deathward. This is the nature of plots. Political plots, terrorist plots, narrative plots, plots that are part of children's games. We edge nearer to death every time we plot." - Don DeLillo, White Noise

What to make of Don DeLillo's Falling Man? The first page looks like trouble: it opens on the chaos of lower Manhattan just seconds after the collapse of the World Trade Center's south tower. It's difficult-for those of us who weren't there-to prevent the prose depiction from being hijacked by memories of news footage of the disaster. Is it "too soon"? Are we still too close to the event for any novelist to examine it from an artistic or critical perspective?

But then, that's beside the point. More so than perspective, Falling Man offers immediacy. The novel captures nothing so well as the disorientation of those first days and weeks after the attacks. In his 2001 essay "In the Ruins of the Future," DeLillo described the attacks as "bright and totalizing and some of us said it was unreal. When we say a thing is unreal, we mean it is too real, a phenomenon so unaccountable and yet so bound to the power of objective fact that we can't tilt it to the slant of our perceptions." This is the space in which Falling Man exists, its characters struggling to reconstruct the illusion of predictability and safety that was shattered when the planes hit the towers.

The story is simple enough: Keith, at work in the World Trade Center on the morning of the attack, narrowly escapes the disaster and makes his way to the door of his estranged wife, Lianne. Over the following weeks the two engage in a largely unarticulated reconciliation, made more complicated as Keith embarks on a brief affair with Florence, a fellow survivor of "the planes," whose briefcase he inadvertently carried out of the smoking ruins.

But like the characters it depicts, Falling Man is continually drawn back to the day of the attack, trapped in the moment, grasping for meaning. More jarring than the physical destruction is the psychological shock of having one's unconscious assumptions thrown into question. After the attack, "Everything seemed to mean something. Their lives were in transition and [they] looked for signs...But things were ordinary as well. They were ordinary in the way they were always ordinary."

This alienation cuts deeper than the political or social level-at its heart it's an alienation from one's sense of self. It's no accident that Lianne at one point ruminates on the writings of Soren Kierkegaard, the proto-Existentialist philosopher who argued that facing the inevitability of one's death is essential to achieving true selfhood. Fear of death- or more precisely, repression of the fear of death-figured prominently in DeLillo's White Noise, and this anxiety, depicted with an undercurrent of comic absurdity in the earlier novel, casts a cold wash of unmitigated dread in Falling Man.

The 9/11 plotters, in this formulation, represent the antithesis of that anxiety, a consciousness fixated on death and as such invested with terrifying power. The story of one of the hijackers, Hammad, weaves its way through Falling Man, and DeLillo hones in on the nature of his Otherness as he tells himself, moments before his plane strikes the tower, "Forget the world. Be unmindful of the thing called the world." Hammad and his compatriots welcome death as the lifting of the veil of the physical world to reveal Eternity. The other characters in Falling Man struggle to hold onto that veil as it is ripped violently away, their myopic mindfulness of the world no longer adequate against the reality that rushes through the hole drilled into the Manhattan skyline.

Don DeLillo is the author of the novels White Noise, Underworld, Libra, and Mao II, among others.

Kevin Adkins recieved a BA in Theater Arts from the University of California, Santa Cruz, and an MFA in Screenwriting from Chapman University.