Michelle Wildgen's YOU'RE NOT YOU 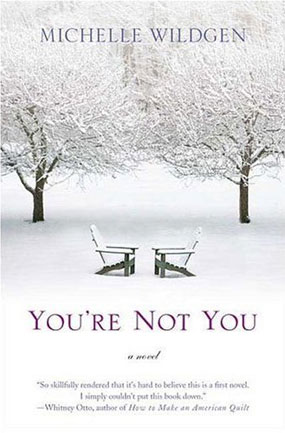 One of the great challenges in writing fiction about illness is keeping the story about people when the reality of medical constraints threatens to dominate. While readers want their authors to get the details of a disease right, the works that resonate are the ones where character trumps biology. In her debut novel about a woman with ALS and her caregiver, Michelle Wildgen manages to do just that.

You're Not You is told from the point of view of Bec, an aimless college student disillusioned with her major and stuck in affair with a married professor. Tired of waiting tables and lured by the prospect of $15 an hour, Bec gets a job as a caregiver despite her only experience in the field being her best friend's tales of volunteering in a nursing home. Much to Bec's surprise, her charge isn't elderly and senile, but a beautiful thirty-something woman named Kate, who comes equipped with a wealthy husband and a house full of nifty gadgets to help her navigate a world unfriendly to the disabled.

After a few awkward days, Bec gets the hang of lifting and lowering Kate from the toilet, washing her private parts with minimal embarrassment, and helping her entertain friends. Before long, Bec can understand and translate Kate's stilted speech better than her husband, and the two are on their way to a fast friendship.

Wildgen's book is an expansion of an award-winning short story originally published in Prairie Schooner. While it's beautifully written and finely observed, there are parts where the padding to make it novel-length shows.

The beginning especially feels forced. The first fifty pages, where Bec predictably finds the work hard but rewarding, read sort of like a promotional ad for the disabled. Kate may be immobile, but look at how much more together her life is than Bec's! Look, Kate may be in a wheelchair but she can still teach Bec how to cook decadent dishes for cocktail parties! It's the kind of well-meaning, didactic sentiment of Lurlene McDaniel's Y/A novels, the kind that is hard to argue with but too easy to be engaging.

Things take a decided turn, however, when Kate decides to leave her cheating husband. Her insistence that she shouldn't have to put up with an adulterous man just because he helps her up ramps and gives her pats of affection is a delicious foil to Bec, forcing her to re-evaluate her own relationship with someone else's husband.

As Bec moves into Kate's new home, their lives become deeper and deeper ensnarled and any remnants of sticky sweet sentimentality dissipates. During Kate's arguments with her husband and parents, Bec becomes Kate's surrogate voice, struggling for the right nuances of tone. When Bec lets her own emotion slip in, Kate chastises her: "This is me," Kate said. . . . I'd never had her look at me this way: no humor, no softening the blow. She let each word sink in and added, "You're not you right now."

In other words, a question of character.

Michelle Wildgen is the author of the novel You're Not You (St. Martins/Thomas Dunne) and senior editor at Tin House Magazine. Her work has been anthologized in Best New American Voices 2004, Best Food Writing 2004, A Memorable Feast (Crown/Three Rivers, Nov. 2006) and has appeared in StoryQuarterly, TriQuarterly, Gulf Coast, Prairie Schooner, and elsewhere.

Shari Goldhagen is a native Ohioan who holds a lot of writing degrees from Big Ten Schools in the Midwest: A journalism degree from Northwestern and an MFA from Ohio State. While writing Family and Other Accidents, Shari stalked celebrities for The National Enquirer, Life & Style and Celebrity Living Weekly. She also received generous fellowships from Yaddo, MacDowell and the Ohioana Library Association. Shari currently lives in New York City where she teaches fiction and works as a freelance writer.

Family and Other Accidents : A Novel by Shari Goldhagen