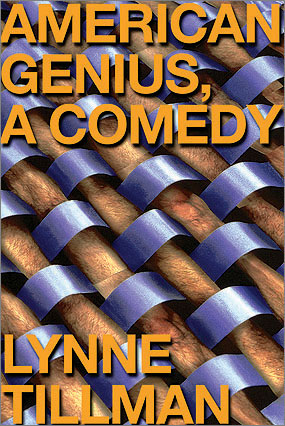 Soft Skull Press, October 2006, 320 pages, $15.00I won't reveal the name of the narrator-protagonist of Lynne Tillman's American Genius, since it pops up suddenly, almost arbitrarily, in the last third of the book. But its placement is a perfect act of characterization: the narrator is not defined by her name so much as her physicality- in particular her skin. For her, skin is something more than just the body's largest organ: it is a source of constant misery and concern, and a point of departure for the funny, melancholy examination (and re-examination, and re-re-examination) of her life and the lives of the objects and people she touches and who touch her.


In the book's present, the narrator is staying in a colony for world-weary intellectuals. While some of the residents seek respite from their day-to-day lives, the narrator seems primarily concerned with thinking through the significant threads of her life. Early and often, the narrator tells us that she regrets not entering the textile business, like her father. She fetishizes the memory of his warehouse full of fabrics wrapped in bolts, stretched out and examined, their patterns pored over for imperfections. But this narrator weaves together stories more expansive in scope than any loom could produce. Her reflections form a compendium of the world, encapsulated like nesting dolls in the American experience, her intellectual and genetic lineage, and her own life.

Lynne Tillman has created a narrator who is a highly sensitive receptor, easily overwhelmed by other people, disgusted by blood and tomato soup, worried by death, with fragile, cracking skin, ever eager to flee to her room for solitude; yet, she is an all-seeing eye, a gatherer of impressions and facts, a vivisector of the world and a synthesizer of disparate notions.

In this last regard, Tillman has given us a phenomenal novel with a distinctly American sensibility. The voice of American Genius is a voracious one, eager to rope together Polish immigrants, Franz Kafka, the Manson Family, domestic animals and their madness and deaths, diseases, ancestry, atheism, spirituality, food, enemies, families, racism, historical kitsch, textiles, and more. It is a voice that strives to find among them every possible connection, and to wring from those connections a better understanding of ephemeral life. Many of this book's sentences are of Proustian length, and each one creates organic, almost casual links among themes. Tillman asks her reader to take on the narrator's own work of cataloguing life's horrors, delights, and inevitabilities, in order, perhaps, to find in their summation the secret to stopping time. By the novel's conclusion, we, like the narrator, find ourselves exhausted by the task of trying to understand it all, and are ready to return to our lives, despite the realization that we are hurtling towards a point when we and those we know will be part of the past tense.

Lynne Tillman Associate Professor/Writer-in-Residence in the Department of English at the University at Albany, is the author of four novels, two collections of short stories, one collection of essays and two nonfiction books. She has collaborated often with artists and writes regularly on culture. Tillman's novels include No Lease on Life (1997), which was a New York Times Notable Book of 1998 and a finalist for the National Book Critics Circle Award, Cast in Doubt (1992), Motion Sickness (1991), and Haunted Houses (1995).

Jonathan Lachance holds a B.A . in English and a masters degree in urban planning, but he's all about fiction. He recently completed his first (unpublished) novel, Heirs of Eminence, and is hard at work on his second. He has published articles on urban planning in Progressive Planner magazine. When he's not glassy-eyed in front of a computer, there's a good chance he's reading something by Murakami or Chandler or practicing Yiddish with his bubbe. He lives in Brooklyn. Contact Jonathan@kgbbar.com.