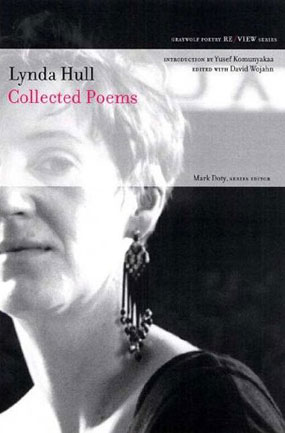 AR Ammons once said: "I have 4/interests--money, poetry, sex, death." In Lynda Hull's three poetry collections, Ghost Money, Star Ledger, and The Only World, compiled here in a single volume as part of the Graywolf Re/View Poetry series, Ammons' 4 interests are sutured by jazz (itself a euphemism for sex).

"Fuck death," the final lament of Hull's "Lost Fugue for Chet [Baker]," shatters the exacting pattern of the seminal poem. In mourning the trumpeter's untimely end, she unknowingly mourns her own: Hull died in a car wreck at 40. Gravely lyrical, she eulogizes the lost, the gone, the forgotten; she illumes sad lives in dim, rhythmic degrees: "at the hour the streetlights come on, buildings/turn abstract." Darkness is revelatory. Lights serve only to intensify confusion. "Hollywood Jazz" places her in a hotel where she is "cool: a woman in a cage/of half light, Venetian blinds." Again and again, a premonitory grief breaks free of her poetry. Hull is a city poet, but her city is "a sweltering geometry of rooms/fire escapes." In bar after bar, inner strife is wedded to the dreamlike ritualism of night life. She memorializes the drink-harried violence of lives fragmented beyond repair: "I know her vices are minor: sex,/forgetfulness, the desire to be someone,/anyone else." She conflates the luckless figures of her youth with doomed celebrities-voiceless and thwarted, illuminated by the false-sun of the spotlight, or, more accurately, the lone streetlight long after midnight.

Private lives are mirrored in the public lives she describes. In one instance, Leon Trotsky pays visit to her grandparents' kitchen in Cleveland. He magnifies her grandfather's weariness. Later, her grandfather "turns his gentle hand against himself." She doesn't wonder "Why?" but rather "Why court the brink and then step back?/After surviving, what arrives?"

The haunting figures Hull gives form to are rendered insensible to failure. They are alcoholics and drug addicts, animated by intense need. Each is disappearing, and Hull catches their final reflections in silver glasses filled with shaved ice. Self-medicated beyond remorse, they accept self destruction like spectators might. Personal failures bear no more pertinence to their lives than headlines in the morning paper-they are comprehended, regretted, and forgotten in one gesture. Though Hull narrates each successive stage of their alienation plaintively, they condemn themselves pitilessly. One lilts, "Darling,/there are no innocents here,/only dupes."

Star Ledger's epigram is by Seamus Heaney: "How perilous to choose not/to love the life we're shown." That is what makes her work so rending. Each person depicted is battling to love this world despite their disenchantment with it. Love may lose or be lost, but her poetry insists that beauty is obstinate, that beauty persists. Hull's threnody blows like a bugle into the vinyl recesses of a barroom's private booths, as day breaks over the stooped men and women therein. It's "the music that plays at the moment/in every late-night noir flick/when the woman finds herself alone, perfectly/alone, in a hotel room ..." It's beautiful music.

Lynda Hull was born in Newark, New Jersey. She received her B.A. from the University of Arkansas at Little Rock and her M.A. from Johns Hopkins University. Her books of poetry include The Only World, Star Ledger, which won the 1991 Carl Sandburg Award and the 1990 Edwin Ford Piper Award, and Ghost Money, which won the Juniper Prize. Hull served as a Poetry Editor at the journal Crazyhorse. She taught English at Indiana University, De Paul University, and Vermont College. She was the recipient of fellowships from the National Endowment for the Arts and the Illinois Arts Council; she also received four Pushcart Prizes. Lynda Hull died in an automobile accident in 1994.

Kendra Sullivan lives in Brooklyn . She studied painting at NYU, where she received the Thomas Wolfe Prize for Poetry. She's worked at Poets House, Apex Art, Archipelago Books, Pequod, and The Center for Book Arts. Last summer she taught arts and crafts in Central America. She'd like to go back. Kendra is also a monthly columnist for KGB BAR LIT. To contact Kendra e-mail: kendra@kgbbar.com.