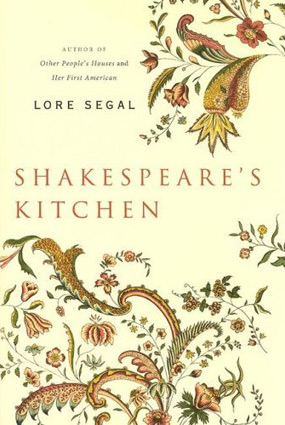 Lore Segal's collection of short fiction, Shakespeare's Kitchen, is not quite a sequel to her last novel, Her First American. The protagonist of both works is a sweet-tempered Austrian intellectual named Ilka, but her last name has been slightly altered between appearances. So have critical elements of her back-story: the lover who dies at the end of the previous book telephones in the latter. A similar discord alienates the stories in the current collection; this discord is largely tonal. Segal boldly shifts the mood from story to story, shading from cold minimalism to intimate psychological realism. Though Segal wrote these stories over decades, the radically inconstant tone doesn't seem accidental. Rather, she views her chosen band of humanity through every available lens.

The stories in Shakespeare's Kitchen are set at the Concordance Institute, a think tank in an insular Connecticut college town, where the intellectual labor is slightly unreal and the actual business consists of organizing parties and socializing. Ilka moves from Manhattan to take a position at the Institute, having immigrated to the States from Austria before the war. In "An Absence of Cousins" she's introduced arriving to her new job. Friendless, she sets about insinuating herself into academic society with a practiced single-mindedness, ruthlessly rebuffing the appeals for friendship of a fellow Austrian while playing out every connection she has. In these early stories, Segal has a dismissive contempt for her characters, whom she depicts as empty chatterboxes. The only character with any life is the director of the institute's wife, Eliza Shakespeare, who seethes with boredom at the center of Concordance society. Ilka pursues Eliza's favor, though she knows that Eliza will only end up despising her.

Segal ratchets up the disconnect of this set to the point of absurdity. This is done most expertly in "The Reverse Bug." Here, one of the students in the conversational English class Ilka teaches develops an indestructible microphone, which he plants in a lecture hall before a talk on genocide. The hidden mike plays a continuous stream of screams from Dachau and Hiroshima that cannot be shut off or drowned out and that can be heard throughout the campus. Though the constant reminder of horror momentarily draws out the humanity in Segal's academics, the episode hammers home her dim view of the characters, who are only shaken out of self-absorption if magic intervenes.

But then a different sort of magic does intervene. Ilka begins a satisfying affair with Eliza's husband, Leslie, and suddenly, the empathy that Segal has been portioning out sparely floods the page, transforming the last few stories and altering the reader's perception of every character. The tonal change works almost like a twist ending that forces you to re-view and reconsider a movie: you assumed that the empathy Segal had previously withheld could not have existed, and you need to see if you were wrong, or if the sudden change in attitude isattributable to authorial carelessness

In "Leslie's Shoes," the most affecting story in the collection, Ilka waits, surrounded by judgmental boors, for an assignation in Turkey. It's only a taste of the exile that she's chancing for a few days of pleasure, and yet, when Leslie finally shows up, the intimacy they share seems worth the risk. It's a more compassionate form of the argument Segal continuously revisits, that while there might not be a very good case to make on behalf of people, there's a much stronger case to be made for not being alone.

Lore Segal's novels include Other People's Houses, Lucinella, and Her First American, which won an award from the American Academy and Institute of Arts and Letters. She has received a Guggenheim Fellowship and grants from the National Endowments for the Arts, and the Humanities.

David Hunter graduated from Vassar College in 2001 with a degree in Literature.