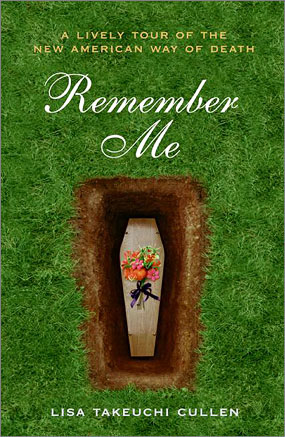 Every few years, death makes a comeback. Since the late 1970s, when Siouxsie Sioux declared herself a "gothic pixie," a death-obsessed aesthetic has cycled in and out of popular culture (and that's to say nothing of its predecessors, the madwomen-on-the-moors literary genre or the Victorian fascination with memento mori). But while death in those cultural moments held a relatively intense charge, lately the grim reaper has been looking lovably wacky. Television series like Six Feet Under have presented death as the accessory for the foibles of an endearing (if sometimes deranged) family, and a quick search on Amazon yields several irreverent literary romps in which "funeral" is more or less a backdrop for fun. Remember Me, by Time journalist Lisa Takeuchi Cullen, is a survey of current American funeral trends that fits neatly inside the death-as-novelty package.

The book is full of great stories, but has one major point: baby boomers, known for their disdain of convention, are reinventing the funeral in their own image. Apparently this means eco-burials (no embalming please), human remains pressed into artificial reefs, funerals as life-affirming parties, and funeral directors-cum-event planners. The "new American way of death," as the book's subtitle has it, is colorful and consumerist, with an emphasis on the personal. To make her case, Cullen traverses the country visiting funeral homes, conventions, burial grounds, and at least one Frozen Dead Guy Days festival (you'll have to read the book for the full story on that one). She interviews several "end-trepreneurs," including a born-again-Egyptian with a mummification business, a pilot with a side business of scattering ashes into the sea, and a couple committed to land preservation via the building of "green" burial grounds. Along the way, she stops to write some obituaries, and these are the most powerful part of the book. Cullen is a gifted storyteller, and she's at her best recreating the lives of loved ones lost, often via a detailed description of their memorial.


Cullen plays up the yuks (she loves to talk about "sleeping with the fishes" in the burial-at-sea section), and the prose is effortless and scrubbed throughout. Perhaps a little too scrubbed. Cullen keeps a careful distance from the darkness of her subject, preferring to focus on the light and humorous lest we think her morbid. Even at the book's end, when her subject finds its way a little too close to home, her purpose seems basically to entertain. But sometimes it feels like she's letting her subject off too easy. I kept wishing she'd add another layer of analysis, and spend longer teasing out the societal implications of her subject. Are elaborate funeral parties - featuring dancing and the deceased's favorite foods - actually more effective at helping people grieve? How do these trends reflect on the generation demanding them? And, just maybe, to what extent is putting the "fun" back into funerals a quintessentially American denial of death?

We can't fault Cullen too much - she's a journalist not a sociologist, and a deep study wasn't the point of her project. She's written a highly readable account of an industry that's changing rapidly and profoundly, and that will at some point touch upon us all. Remember Me is a new look at what may be one of the least-examined parts of our lives.