Tori Schacht graduated with a degree in English literature from Hamilton College. She spent a year riding motorbikes over precipitous terrain, attending the weddings of strangers, and learning to appreciate air conditioning as an English teacher in Indonesia. Since then she's worked in book publishing in New York. Her work has appeared in The Rumpus, Rain Taxi, and Full Stop, and her reviews have been featured in the Powell's Review-a-Day. 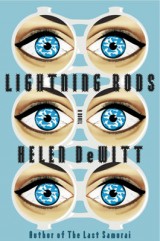 “It's not for everyone,” explains Joe, proprietor of Lightning Rods, Inc., to a bewildered new applicant.

The contribution? In essence, it's a form of anonymous workplace prostitution, provided by office temps. Offered to the most successful men in corporate America, Lightning Rods, Inc. provides on-site sexual release, which prevents otherwise inevitable sexual harassment lawsuits. With this service, “In a sense you were protecting people from something that was no fault of their own, i.e. a tendency to insult female staff through some kind of testosteronal imbalance.” So goes the absurdist premise for Helen DeWitt's brilliant new work of satire, Lightning Rods (New Directions). This second novel comes a decade after her debut, The Last Samurai, first self-published by DeWitt, but which went on to become a sleeper hit, inspiring enough of a veritable cult of DeWitt admirers that it was ultimately re-published by a major publishing house. Prudish readers beware: Lightning Rods is an unrelentingly dirty novel. Set in the early 1990's, the story finds Joe, a disenchanted vacuum cleaner salesman living in a trailer on the Florida coast, spending most of his days fantasizing about bizarre sexual scenarios involving game shows, locker rooms, and unwitting female participants. Frustrated by his lack of financial prospects, Joe has a moment of revelation: “if there is something that makes you different from everybody else it may be that thing is your unique selling point.” Joe's own unique selling point—his sexual imagination—gives way to Lightning Rods, Inc. The company is there to save certain men, driven by a “don't-take-no-for-an-answer” mantra, from themselves. Lightning Rods—“career-orientated women” (DeWitt delights in these malapropisms)—provide their services in the comfort of the office's handicapped restrooms, in a configuration that assures the anonymity of both parties. Stopping short of divulging the architecture or the mechanics of the setup here, suffice to say it generates much of the novel's comedy.In classic American Dream fashion, Joe quickly finds himself with an increasing number of companies demanding the services of Lightning Rods, Inc., and a host of resultant problems. In one of the funniest scenes, Joe faces accusations of violating the Equal Employment Opportunities Act, and, in an unexpected boon, Joe's invention of Lightning Rods dovetails with his development of adjustable toilet seats for the vertically challenged.DeWitt deftly employs the hackneyed language of the sales industry through the entire novel, as Joe drops truism after truism. “Don't look a gift horse in the mouth.” “You have to deal with people the way they are, not how you'd like them to be.” “It's important to be able to prioritize.” (She also uses italics to such hilarious effect, rivaling Salinger himself.) With equal glee, DeWitt wrings every scenario possible from the plot; from Lightning Rods as prostitution rehab, to the FBI's interest in the enterprise. The story's recursive tendency grows wearisome, particularly towards the end. The reader senses they are losing a war of attrition, with Joe gradually winning their attention, if not their sympathies. In this way, DeWitt's narrative takes on the quality of the very character she parodies—the indefatigable salesman—and it's here that a glimpse is offered of the disarming power of oppressive ideology. “In America anything is possible,” Joe reasons by the end. Lightning Rods are but a start. Helen DeWitt is the author of The Last Samurai, which has been translated into twenty languages. She lives in Berlin. She was born in a suburb of Washington, D.C. in 1957. Her father joined the Foreign Service in 1960, and she grew up primarily in South America. She has a B.A. in Literae Humaniores and a D.Phil. in Greek and Latin Literature from the University of Oxford. Her first novel, The Last Samurai, was published in 2000 by Talk Miramax Books and subsequently in nineteen other countries. A Guggenheim Fellowship (2006-7) supported work on Risk, a novel incorporating the information design of Edward Tufte (in progress). She has collaborated with the painter Ingrid Kerma on the show "Blushing Brides," with journalist Ilya Gridneff on the novel Your Name Here, with photographer Emily Horne on "Sexual Codes of the Europeans" for Photography & Prose (under curation), and with artist Elizabeth McAlpine on "Plantinga" for Photomonth Krakow.

Tori Schacht graduated with a degree in English literature from Hamilton College. She spent a year riding motorbikes over precipitous terrain, attending the weddings of strangers, and learning to appreciate air conditioning as an English teacher in Indonesia. Since then she's worked in book publishing in New York. Her work has appeared in The Rumpus, Rain Taxi, and Full Stop, and her reviews have been featured in the Powell's Review-a-Day.