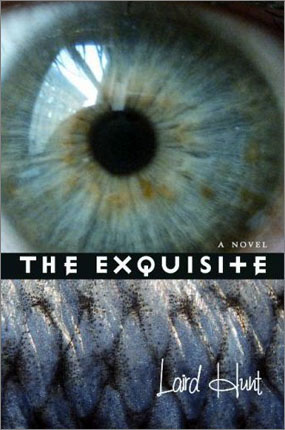 Coffee House Press, September 2006256 pages, $14.95
Henry: thief, loser, and the main character in Laird Hunt's creepy novel The Exquisite, relates his story like a shell-shocked vet, weaving mundane detail and adventure in two narratives with spooky detachment. Henry's story is a bizarre one, and to make matters more confusing, while he eats herring and hangs out in the East Village with an odd old man named Aris Kindt and Tulip, a beautiful tattooist, he may be trapped in a mental hospital, and largely delusional.

Hunt describes Henry's entrance into Kindt's world this way: "The door is wide open. Mist or cold smoke billows out and I walk in." It is fitting that an obscuring, yet inviting haze ends the first chapter of this strange and engrossing book, especially one so fascinated with all its odd characters. Aris Kindt is the best of Hunt's shadowy weirdos, and he dominates both storylines with his obsessions (including fish and death), his alarming generosity and flashes of temper. When Hunt reveals exactly what Kindt's business is - engineering fake murders for New Yorkers - we know it is only a matter of time before Henry's friendship with him turns dangerous.

Objects, phrases and locations repeat to bind the interwoven narratives. Early in the book, Henry sees an ex-girlfriend strolling with a new guy: "[She was] walking with her arm around a young man dressed fashionably in rumpled beige linen pants and a bright green Cockfighter T-shirt." Later, this: "Now, it wasn't as if I hadn't made an effort since I had gotten into murders ... to keep myself more or less presentable and to acquire some new clothing. In fact, at that very moment, I had on my favorite green rooster T-shirt, a pair of fairly clean, nicely rumpled linen pants, and some acceptable leather on my feet." Is the first young man Henry minus the breakdown? Is the second Henry's unconscious attempt to connect with his past? Though Hunt can falter in his interweaving, for the most part the variations serve as a form of narrative harmony.

The 9/11 attacks loom in Hunt's New York, clogging the atmosphere of The Exquisite with a heavy slowness and confusion. They are referred to as "the events downtown" by various characters. Cloaked meditations on the day appear throughout the novel. "It was so strange," says one character, "to have pulse when those around me did not, to have hands and feet and toes I could still wiggle when those around me did not, to be able, after those long minutes, to be able to rise and leave when those around me could not." Even the faux-murders are in service of the book's questions about death and the perverseness of survival.

The Exquisite is an excellent exploration of a shattered life. Hunt's two compellingly imagined shards suggest so many others in such a way as to almost command the reader to question his or her own sense of just what has happened in the last five years.

Laird Hunt is the author of a book of short stories, mock parables and histories, The Paris Stories (2000), from Smokeproof Press, and two novels, The Impossibly (2001) and Indiana, Indiana (2003). His writings and translations have appeared in the United States and abroad in, among other places, McSweeney's, Ploughshares, Bomb, Grand Street, Fence, Conjunctions, Brick, Mentor, Inculte, and Zoum Zoum. Currently on faculty in the University of Denver's Creative Writing Program, he has held residencies at the MacDowell Colony and the Camargo Foundation in Cassis, France. He and his wife, the poet Eleni Sikelianos, live in Boulder, Colorado with their daughter, Eva Grace.

Carrie Jones is a freelance writer in New York. She is a Senior Web Editor for Topic Magazine, a quarterly publication of nonfiction, first person nonfiction and contemporary photography. Her writing has appeared in The Village Voice, Bookslut and ruinedmusic. She blogs about reading and writing at try harder.

The Impossibly by Laird Hunt