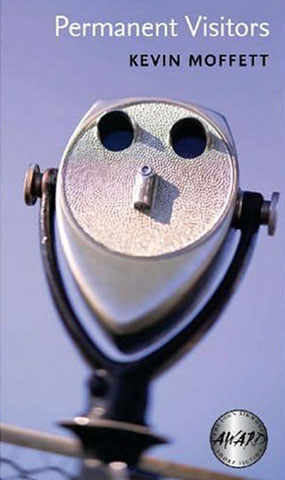 University of Iowa Press, October 2006
176 pages, $15.95
The title is more apt and to the point than any synopsis could be: the characters in Kevin Moffett's book of short stories are all precisely Permanent Visitors. They are tan, listless protagonists stranded in their hometowns--outcasts living in idiosyncratic eddies adjacent to a flood of Florida tourism. They are ourselves, our benefactors, our babysitters--drifters, strangers, and medicine men. They are keen observers tapping on the glass in the Florida Zoo, both participants in and exiles from the attractions. Each character expresses his own logic, and each marks his place as the topography of his existence episodically expands and contracts. Moments focus, then dissolve, as they pedal, drive, or sway through the foam.

Permanent Visitors is bound by an emotive keystone in Moffett's prose that seeps under our skin and loiters there. Unfamiliarity in the face of everyday sameness is the shared elephant in each of his characters' fibrillating hearts. However, the conduits through which the characters rationalize these ruptures in their lives are all vastly specific, and piquantly bizarre.

In the opening story, "Tatooism," an asterisk is tattooed on the back of a young woman's thigh, as if suggesting the need for a disclaimer to her actions. In the following short, "The Fortune Teller," a retired soothsayer posts her last wishes on the refrigerator door in an act of 'neutral suspension'--to delay the anticipation of her unsettled future. And in the inner-dialogue of a cynic's romance, "A Statement of Purpose," a lover's dental flaws become a gift of the Magi. The crooked parts pull at the straight as these two Henry James-cursed lovers attempt to delay self-definition for fear of 'the forfeiture of possibility'.

If Robert Coover's 'hero' in Aesop's Forest were suddenly taken out of the mythological woods and placed in a zoo, he would be Moffett's everyday-man idealist in "Ursa, on Zoo Property and Off"--a man who struggles against summarization, only to be pitied by the monkeys. Or if Dallas Wiebe's dillusionist king in Going to The Mountain were a lustful college student, he would be Moffett's foreigner, Spiros, the Greek-huntsman out to capture an ethereal university goddess. From Spiros's passion-soaked naiveté, Moffett miraculously constructs the necessary mirage that allows a deity to become a wife.

Moffett has the rare ability to render the everyday as urgent and infinitely nuanced; his motion is impossibly sensual, his language didactically poetic. He makes the old new, and in such a way he is quintessentially modern, a constant investigator and reshaper of boundaries. Each detail and choice is a personal shrine of circumstance, a scene working to crystallize emotion. He captures the dregs of boredom, loneliness, mania, and grief, abstracting them from their darkness, releasing their brilliance with manipulations of alignment, mood, and time. He reveals the threatening to be beautiful and necessary, and suggestively illuminates the repressed. In other words, like the candles in his "Tatooism," the light of Moffett's stories "cast roving shadows on the walls: excited arms (and) retreating animals."

Kevin Moffett's "Newcomer"--the final episode in Permanent Visitors--is featured in the KGB Fiction Section. Additionally, a podcast of Moffett's recent reading at the Sunday Night Fiction Series can be found in the KGB LIVE blog.

Kevin Moffett was born and raised in Daytona Beach, Florida. His stories have received the Nelson Algren Award and the Pushcart Prize, and have appeared in McSweeney's, Tin House, StoryQuarterly, the Chicago Tribune, and elsewhere. "Tattooizm," originally published in Tin House, is forthcoming in The Best American Short Stories 2006. His first collection of stories, Permanent Visitors, won the Iowa Short Fiction Award, judged by George Saunders, and will be published in October. He lives with his wife and young son in Gettysburg, Pa., where he will spend 2006-2007 as the Emerging Writer Lecturer at Gettysburg College. Contact Kevin at luistiant@hotmail.com