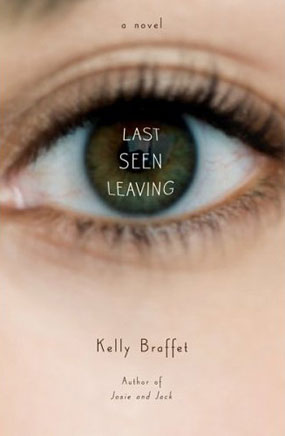 Five dead girls, a missing pilot, CIA cover-ups, a runaway, and a mysterious unidentified serial killer. In Kelly Braffet's new novel, Last Seen Leaving, these typical thriller scenarios are written in a graceful prose that creates what could only be called literary fiction. Braffet's gothic cast is believable from the first page, their voices are rich with intrigue and stories rife with secrets. Last Seen Leaving blends intricate horror and suspense with sophistication and tender promise.

Last Seen Leaving is the story of Anne Cassidy and her drifter daughter, Miranda. Miranda and Anne have been estranged for a few years when Anne decides to call Miranda on her birthday. After several calls and no answer, Anne leaves her home and new-age lifestyle in Sedona to travel across the country to Pittsburgh in search of her daughter. Anne is still dealing with the pain of losing her husband - Miranda's father, an airplane pilot who went missing in Central America. While Anne looks for her daughter in Pittsburgh, Miranda is actually living in Lawrence Beach, having hitched a ride with George, a shifty character who may work for the CIA. When five girls are found dead, one cannot help but suspect him. The suspense of the novel is in the hunt for information regarding Miranda's father and Anne's quest to find Miranda.

Anne and Miranda take turns narrating the novel. Braffet conquers mother and daughter's voices equally, partitioning their experiences through tone and rhythm. Both Anne and Miranda experience flashbacks, and though Braffet's separation of character may break down in these moments, the flashbacks are so strong and skillfully written that the small abberations are easy to excuse. The novel deftly swings between these dualistic perspectives without faltering until the very end, when Braffet hastily resolves the plot. Though the entire story moves quickly, the resolution's breakneck tempo felt jarring. In the end, though what Ann and Miranda pursue is futile, and their aims remain elusive, the final chapters provide what they really longed for -- peace.

Continuing a concept from her first book, Josie and Jack, Braffet has written a novel that weaves together multiple genres. The book reads cinematically, due to Braffet's smooth images, most cleverly done in Anne's descriptions of her daughter: "She and two of her friends all wore the same blurry, drunken leer, but on Miranda it looked confrontational, reckless." Last Seen Leaving brings to mind such films as U Turn, or Two Days In The Valley, not necessarily in terms of plot, but for the wit, twisted characters, and suspenseful momentum.

Braffet is proving herself to be a master of this hybrid genre, a flexible writer able to juggle many emotions, actions, locations, and characters with ease. She has turned ghost stories into an art form, while making sure her readers never enter a car driven by a stranger again.

Kelly Braffet's first novel, Josie and Jack, was published by Houghton Mifflin in 2005. It was praised as "wicked fun . . . a gothic tour of hell" (Los Angeles Times) and "a compelling study of love, hate, and psychopathic jealousy" (New York Post). Braffet was born in Long Beach, California, in 1976, and has lived in Arizona, rural Pennsylvania and Oxford, England. She is a graduate of Sarah Lawrence College and Columbia University, and has taught novel writing at the Sackett Street Writing Workshop. She currently resides in Brooklyn, NY with her fiancee, the tall and embarrassingly talented writer Owen King. They have three cats.

Thalia Aurinko-Mostow is currently finishing her B.A. in creative writing at The New School. She completed her first novel, which received glorious praise from her grandmother, earlier this year, and has recently begun work on a second. She lives in New York.