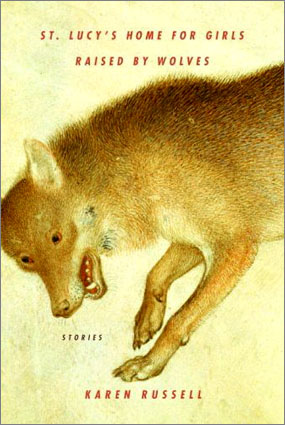 The precocious child narrators of St. Lucy's Home for Girls Raised by Wolves, Karen Russell's daring debut, face hurdles far greater than puberty. The children have fathers with horns, voices that cause avalanches, and vocabularies most adults would envy. In one story, "Children's Reminiscences of the Western Migration," a young boy trails his family West, worrying not only about dysentery, but the company's opinion of his father, a Minotaur. In "Haunting Olivia," a story previously published in the fiction issue of The New Yorker, two young boys search for their dead sister who floated away in a crab shell.

Karen Russell grew up in Southern Florida, the setting used for most of the stories included in her collection. Every location is exquisitely described, and on fantastical islands in the Florida marshlands, Russell's writing explodes. The enchanted prose presents a world both surreal and familiar, and by the final story, it feels as though the book was just a night of vivid dreams.

At times the pieces in St. Lucy's Home for Girls Raised by Wolves read like simple bedtime stories, but I would not recommend them for children. Their subject matter causes an inner reflection generally saved for the coming-of-age novel. The reader can place themselves not only as the clever child, but the fumbling adult. The collection forces a second look into the murky water; in some stories it is an overgrown alligator that might rise to the surface; in others, magic goggles and glowing fish are all that lurk behind the page.

In "The Star-Gazer's Log of Summer-Time Crime," Ollie, the teenage narrator, speaks with the wisdom and meter of someone twice his age. "I guess that's what growing up means, at least according to the publishing industry: phosphorescence fades to black-and-white, the facts cease to be fun." Russell's bright moments of humor are overshadowed by the growing intelligence of the young unconventional narrators. Though it was easy to slip into Russell's mythological world of Minotaurs and Werewolves, the overly articulate children frequently felt contrived.

Karen Russell's writing evokes the Southern flair of Flannery O'Conner, but comes closer to the newer works of A.M. Holmes. Both Holmes and Russell create relationships between their characters and their animal counterparts to develop the stories. In Things You Should Know: A Collection of Stories, Holmes uses shape-shifters for effect- humans that can change into any number of animal forms. Russell successfully tries a similar transformation in "St. Lucy's Home for Girls Raised by Wolves," the collection's title story. The adolescent girls are sent to reform school by their Werewolf parents, with hopes of learning a more civilized life.

Here again, the young characters are left to face problems larger than teenage concerns, like who will ask them to dance (although it is required for them to learn the Sausalito). The girls are worrying about adapting to humanity and joining society.

The fresh and innovative talent in St. Lucy's Home for Girls Raised by Wolves make it is easy to see why New York Magazine named Russell as one of their top twenty-five under twenty-five to watch. And, despite the humidity and hurricanes, I'd be delighted to journey back to her mystical Floridian island any time.

Karen Russell, a native of Miami, has been featured in both The New Yorker's debut fiction issue and New York magazine's list of twenty-five people to watch under the age of twenty-six. She is a graduate of the Columbia MFA program and is the 2005 recipient of the Transatlantic Review/Henfield Foundation Award; her fiction has recently appeared in Conjunctions, Granta, Zoetrope, Oxford American, and The New Yorker. Twenty-five years old, she lives in New York City.

Thalia Aurinko-Mostow is currently finishing her B.A. in creative writing at The New School. She completed her first novel, which received glorious praise from her grandmother, earlier this year, and has recently begun work on a second. She lives in New York.
karen_russell_s.