Hope Heath Ewing has an MFA in fiction from Columbia University and has reviewed books for The Brooklyn Rail and The Nervous Breakdown. She makes an excellent Margarita. 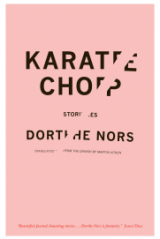 Years ago, fresh cut from one of those breakups that forces you to alter your daily life on the most minute levels, I was attending the wedding of a family member marrying her first love after a few months' courtship. The ceremony was predictably traditional, but I could not help feeling the deep off-ness, particularly when it came time for the 1 Corinthians reading, when all I could think was how impatient and unkind love could be. That I had changed in a way that made the happy people around me foreign. I could not have been aware, at the time, that I was occupying a Dorthe Nors story. Though Nors had already published a couple of novels in Denmark by then, not until this month have English readers been treated to an entire volume of her stories in translation. A collaboration between Graywolf Press and A Public Space, Karate Chop brings a sly, steady voice in a collection of fifteen varying stories. As a collection, the book feels like a wall covered in framed pictures, all different sizes, not entirely related in tone or subject, but with a unifying wash that marks each as the creation of the same precise writer. The stories share a sense of empathy but not excuse. Characters transition out of childhood ("Do You Know Jussi?", "The Winter Garden," "The Wadden Sea") through quiet flips of perception that cause inner sea-change. Some ("The Heron") are alienated by the smug happiness of others. There is a pervading focus on marital and family relationships, and Nors is adept at presenting the complexity of being exalted and harmed--intentionally or otherwise--by those closest to us. The most compelling aspect of Nors' art is what unifies the collection: the author's insistence on giving us what is, not what it looks like. The action is internal: we get few descriptions of people moving through space, not much dialogue. Scenes are often as not played out in memory or the narrator's imagination. Characters are rarely identified with physical details. These are stories about what has truly occurred, not what appears to have occurred. So skillfully, we get invisible emotional implosions, and things so close to us that we don't have a visual on them. A husband contemplates female aggression while avoiding his wife late at night ("Female Killers") tests our detective skills, as does the account of a megalomaniac flying off the rails ("The Buddhist"), so embedded in the narrator's psyche that we must piece together the sane person's version like journalists. The added seasoning here is the humor. Death, mourning, loss of innocence, loss of sanity, all treated with an evenhanded panache that provides a sense of eerie objectivity, despite the closeness of each narrator. The best example of this is "Duckling," where a father's marital betrayals are discussed in a way that nevertheless reinforces familial love, without hinting at anything as simple as forgiveness. It attests to both the skill of the translator and the author's transcendence that these intimate puzzles read so visceral, so true.Dorthe Nors is the author of five novels, and the recipient of the Danish Arts Agency's Three Year Grant for “her unusual and extraordinary talent.” Her stories have appeared in AGNI, Boston Review, Ecotone, Fence, A Public Space, and the New Yorker.

Hope Heath Ewing has an MFA in fiction from Columbia University and has reviewed books for The Brooklyn Rail and The Nervous Breakdown. She makes an excellent Margarita.