While superstition, belief in evil spirits, or fear of bad karma is certainly not culture-specific (my Irish grandmother kept banshees away by rubbing her fingers raw on Rosary Beads), Díaz uses it as a foundation to explain the remarkably tough tidings that befall the good people of the Dominican Republic and one of its misplaced sons, Oscar Wao. 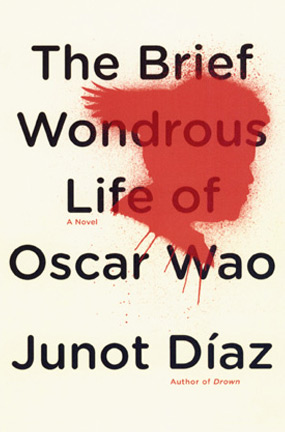 Fukú is not a spelling-check-be-damned "fuck you," but a curse - a mucho mala dose of rotten ju ju, and the lurking theme of Junot Díaz's scintillating new novel, The Brief and Wondrous Life of Oscar Wao. While superstition, belief in evil spirits, or fear of bad karma is certainly not culture-specific (my Irish grandmother kept banshees away by rubbing her fingers raw on Rosary Beads), Díaz uses it as a foundation to explain the remarkably tough tidings that befall the good people of the Dominican Republic and one of its misplaced sons, Oscar Wao.The porcine Wao is the tip (or the base, if you want to be metaphorically cruel) of the fukú iceberg. Growing up in the ruined wilds of industrialized North Jersey, he is a Ghetto Nerd, whose obese homeliness, sci-fi devotion, and virginity (not his choice) makes him an urban wallflower, or, as Díaz writes, the neighborhood pariguayo (party watcher). Oscar is nothing like his male Dominican counterparts: suave and sexually active players who eat more puto than plaitanos. Díaz paints Wao's grotesque physicality and pariah's penchant for role-playing games with a brush that makes one sorry for the youngster's predicament, but also angry that he doesn't do something about it. You feel Oscar's plight more than you can rationalize it, and in this regard Díaz has created a conflicted but memorable character that floats somewhere in the literary ether between Dostoevsky's Raskonikov and John Kennedy Toole's Ignatius Reilly. Like all talented writers, Díaz has the capacity to teach without seeming to. The novel is akin to a Ken Burns PBS documentary, so thorough is it in sizing up the history of the DR and it's villainous despot, Trujillo (the alleged source of all the fukú). But Díaz's lesson plan is denser, more stunning, and more painful to experience than anything taught in a classroom. He has the rare literary chops to integrate the past into the present while creating an inevitable future. One way he accomplishes this time-meld is with the use of footnotes that are scattered expertly throughout the text, illuminating, for the most part, the dank atrocities of the Trujillo years. Yet these asides are seamless extensions (not required pit stops) of the narrative, written in the same conversational (a mix of English, Spanish, and professorial-level ebonics) that Díaz has expertly crafted as a literary voice.Díaz's novel reads in some way like a My Space page - with words as links and ideas as portholes to communities and forums heard and unheard. Like James Ellroy's American Tabloid, a novel that blends facts and fiction to create a new and more believable motive behind the JFK assassination, Díaz recounts history (the DR saga and the diaspora of its peoples) in a way that seems more credible and complete than any journalist's take could ever do.So I strongly suggest reading The Brief and Wondrous Life of Oscar Wao. And not just for the usual reasons for reading a book of high caliber, but because it might provide one with an injection of Zafa - the antidote for fukú. However, if you feel immune to the dark forces of the ghost world, feel free to ignore my recommendation. Just don't come crying to me when the shit hits the fan, because, amigo, you know it will.