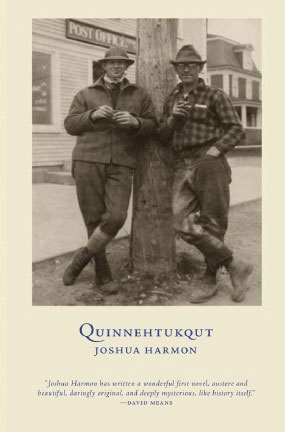 Starcherone Books, July 2007
228 pages, $16.00
Told from a multitude of perspectives, Joshua Harmon's debut novel, Quinnehtukqut, explores a fractured form of storytelling. Set in the same tracts of land along the Connecticut River, Quinnehtukqut toys with the reader's sense of orientation by cloaking the identity of the narrators and rearranging time in a way that can never quite be put back.

A work of historical fiction, Quinnehtukqut - its title is derived from the native word for Connecticut - presents the story of Martha Hennessy, an attractive young woman consigned to a life of domestic employment with her mother at the lodge Idlewild circa 1920. Harmon renders the lodge an exciting and lively place, where men linger after dinner to smoke pipes and gossip about promising business prospects as well as unsavory local characters, yet Martha longs desperately to escape. The reader watches from various angles as she labors, suffers her mother's admonitions, and slips out at night - both in memory and in actuality - with a young man to canoe the lake and to chart a course out of Idlewild.

The pages are also peppered with various sub-plots. Highlights include the legend of Jimmy Frye, a misguided gold hunter in the hills of New Hampshire; Miss Linnie Abbott, forced to remove her house from a plot of land declared no longer hers; a princess alternately exiled to and from her castle. Without any clear development, these narratives tend to wriggle off towards the parameters while Martha's story forms a deeper tempo, prompting reflection on her individual condition and on the larger metaphor of entrapment.

Harmon's prose is diverse and often lyrical, at times obeying a poetic logic reminiscent of Wallace Stevens. In the second section, "Toward the Interior," the narrator relates his quest for Martha in the Boston of 1979. The reader can only assume it's the same Martha, although time has surely aged her significantly. "In the apartment she had rented, another woman now lived. How many times I had passed that door and climbed the stairs beyond. At night, looking up at the lighted windows, I saw this other woman's shadow move behind the curtains. I did not know if this made me another man."

In other places the prose is primitive, evoking a crudely scrawled diary. "To day saw a bear my horse started nearly Threw me but the bear run off Jimmy laughed but the horses no good." At other times the writing approaches stream of consciousness, recalling Faulkner: "It wasn't the trees but the shapes between the trees in the dark the different colors of the dark and how I walked through it not a man could've followed or even kept pace could he have seen the path."

Ultimately, history is not the central focus of Quinnehtukquet, but rather, an interesting texture of the story. Just as Harmon cloaks the identity of his narrators, the aim of his novel is obscured under the genre of "historical fiction." And although he employs an array of historical sources, underneath is a work of experimental narrative fiction, whose primary subject is the imprisonment of perspective. What elevates Quinnehtukut from simple experimentation is the close attention to language that pervades each section, producing a bold effort from a new writer eager to push the boundaries of storytelling.

Joshua Harmon's work has been published in Antioch Review, Iowa Review, New England Review, Southern Review, TriQuarterly, Verse, and many other magazines, and he has received fellowships in fiction from the National Endowment for the Arts and the Rhode Island State Council on the Arts. He teaches at Vassar College and lives in Poughkeepsie, NY

Anne Cammon is a poet and writer who was educated at Barnard College. She curates a literary radio show for WKCR FM New York, featuring contemporary works of poetry, fiction and new music as well as artist interviews. Her work has recently appeared in Fly, Nth Position, Rumble, Blue Print Review and the Bloom's Day edition of Riverbabble.