Joseph Coulson's OF SONG AND WATER 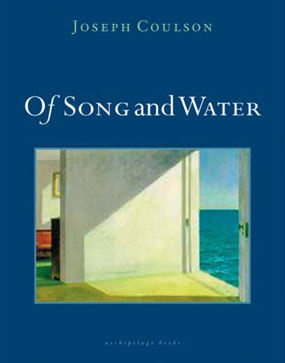 Archipelago Books, April 2007
260 pages, $25.00
This overtly poetic Midwestern Gothic has a rhythm and pull that carries it through its sometimes overwrought stylings. Jason "Coleman" Moore is an itinerant jazz guitarist and sometimes-sailor whose alcohol-soaked life is haunted by the ghosts of his domineering forbears and by fraught relationships with his daughter, his former lover, his ex-wife, and his musical soul-mate and partner. Moving backward and forward through time and place, between Detroit in 1932 to present-day Lake Huron, Of Song and Water is a convincing if static portrait of loss and regret.

Coleman Moore is a challenging and sometimes frustrating protagonist. Self-absorbed, irresponsible, and not particularly articulate, he is torn between the sailor-hero legacy of his father and grandfather and his ill-formed sense of musical ambition. It testifies to Joseph Coulson's resources as a writer that his portrayal of this proud, difficult man contains enough psychological acuity to carry the weight of a novel-length narrative. Coleman is a broken man, physically and emotionally, haunted by his own missteps, but Coulson gives him a stubborn dignity that endows his failures with a poignant sense of missed opportunities.

The novel's evocative power stems largely from its deftly-managed narrative structure. Rather than following a straightforward account of the protagonist's life, Of Song and Water moves along a series of emotionally gripping shifts in time and place. The flow of Coleman's consciousness shapes the narrative, which is organized thematically rather than chronologically, as characters and scenes move ethereally in and out of focus. This technique is also the source of the novel's Gothic inscrutability; the slow unspooling of Coleman's past-which includes murder, mutilation, suicide, infidelity, and other Faulknerian squalors-casts his anomie in terms of existential despair. He "considers whether or not the sacrifice of his hands served as some sort of redemption, a strange rite of passage-a fated balancing of the scales," saying to himself, "I had yet to discover the full extent of my sins, the crimes of my family, my history, but there's no salvation in pleading ignorance." Coleman may take a perverse pride in his flinty worldview, but the burden on the reader grows increasingly heavy. There is no humor and very little light and joy in this book; despite the nautical scenes and occasional paeans to the lure of open water, the story's mood is relentlessly claustrophobic. Coulson's ornate and sometimes heavy-handed prose does not help. He is clearly a gifted stylist-his descriptions of small-town Michigan are precise and lyrical-but he is capable of wince-inducing overreaching:

He takes the opening, finding new turns and dark
corners in the song and creating a world all his own.
He plays a cascade of diminished runs that electrifies
The air. It sparks a small flame of tenderness and
fills the room with audible light.

A "cascade" that "sparks"? "Audible light"? Unfortunately there is quite a lot in this vein,
blunting the effect of the novel's crisper passages.

In the end, Of Song and Water stands as an admirable but not wholly successful literary-genre hybrid. An unreliable and shifting narrative is traditionally associated with the experiments of high modernist fiction, which is why Of Song and Water renders an odd dissonance. When yoked to the Gothic grotesquerie and the high-falutin' language, the fractured narrative seems out of place. Coleman Moore's story is many things: a warning against overvaluing personal freedom, a metaphysical meditation on divine will, an ode to the transformative power of music. These are good and deep qualities to explore, but it's a slow ride.

Joseph Coulson, novelist, poet, and playwright, was born in Detroit in 1957. His first novel, The Vanishing Moon, was selected for the Barnes & Noble Great New Writers series and won the Book of the Year Award, Gold Medal in Literary Fiction, from ForeWord Magazine. Coulson is the author of three volumes of poetry: The Letting Go, A Measured Silence, and Graph. Coulson has been the recipient of a Gray Writing Fellowship (selected by Robert Creeley) and a Ph.D. in American literature from the State University of New York at Buffalo. A teacher for many years, he recently served as Editorial Director for the Great Books Foundation in Chicago. He now lives in Cambridge, Massachusetts.

Michael Lindgren is a musician and poet whose writing has appeared in the L Magazine, Rain Taxi, Public Illumination Magazine, and American Book Jam. He lives in Manhattan.