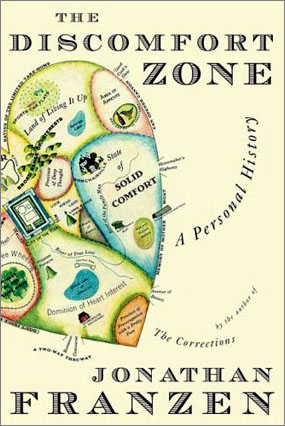 Farrar, Straus and Giroux, September 2006
185 pages, $22.00
Jonathan Franzen is normal. He may write more bestselling novels than you, or even make more public affronts to Oprah's integrity than you, but his new memoir, The Discomfort Zone, sinks its teeth in deep with one shining hook: Franzen's average life.

The story begins with the adult Franzen plundering his childhood home as he prepares the house for sale. The scene is the spark igniting the rest of the book: Franzen shoving family pictures into grocery bags, disposing of nine-year-old meat from the freezer, parsing and piecing together his past to evaluate how he acted and was acted upon from a (slightly) wiser perspective.

The author grew up as many of us did. Born to a blue-collar family in a Midwest suburb, he struggled with alienation, girls, overbearing parents, etc, etc. What Franzen does better than many of us, however, is recount his life with such engaging insight that the particulars fade away; the remainder thus extends far beyond his hometown of Webster Groves, Missouri.

From the outset, Franzen discloses his unflattering qualities: the child he renders is bitter, competitive, and unappreciative of the mother whose death serves to introduce the book. He is, in short, a human being, candid and vulnerable about his past, going to great lengths to understand why he was as he was. He provides brief bios of everyone who greatly influenced him. These, for the most part, are as engrossing as Franzen's own story: his father's embarrassment when caught up in beach house fraud, the rise of a charismatic leader of young Franzen's Christian youth group. When grounded in specific, tangible effects on Franzen himself the episodes fade gracefully into the surrounding story, allowing us to return to Franzen's life more aware of his circumstances. Occasionally, though, Franzen overindulges in superfluity: the bio he gives of Charles Schulz is too long and abstracted to be of any interest. He may have been a big fan of the Peanuts comic strip, but Schulz's neuroses are barely relevant to the story in progress. Thankfully, this is a rare mistake.

In 200 pages, Franzen sifts through 40+ years at a quick and conversational pace, painting wide panoramas with a few strokes. He oscillates between his own narrative and exposition on the more distant past, recounting the stories of his youth with naiveté intact. Young Franzen believes wholeheartedly, for example, that his college-age virginity is due to a terrible case of bad luck, and the author is wise not to undercut this from his more cynical adult stance. As he gets older, though, he paints his opinions in sharper relief to the truth-no longer as bemused observation, but as an acknowledgement of the problems of carrying his stubborn immaturity into adulthood.

So many memoirs become slaves to the author's agenda-a politician trying to justify her actions or a celebrity attempting to mop up the last of his fifteen minutes. Franzen instead displays a candor reminiscent of James McBride's excellent memoir, The Color of Water. Like McBride, Franzen provides the lens of his youth (and his mother's, in McBride's case) to surmise the origins of the person that became, but does not place the finished portrait in front. The story continues beyond the final period; any analysis cannot be final on a life in flux. Franzen has merely provided the template for a journey we must all make, even if our stories don't end up on a bestsellers list.

Jonathan Franzen was born near Chicago in August, 1959, and grew up in Webster Groves, Missouri, a suburb of St. Louis. After graduating from Swarthmore College, in 1981, he studied at the Freie Universitít in Berlin as a Fulbright scholar and later worked in a seismology lab at Harvard University's Department of Earth and Planetary Sciences. Mr. Franzen is the author of three novels- The Twenty-Seventh City (1988), Strong Motion (1992), The Corrections (2001)- a collection of essays and How to Be Alone (2002). His honors include a Whiting Writers Award in 1988, a Guggenheim Fellowship in 1996, the American Academy's Berlin Prize in 2000, and the National Book Award (for The Corrections) in 2001. He writes frequently for The New Yorker, and he lives in New York City.

Ryan Max is an intern at KGB BAR LIT and an undergraduate student at NYU.