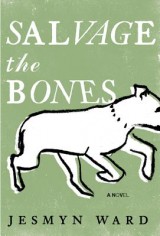 Jesmyn Ward's novel Salvage the Bones (Bloomsbury) is a slow burn over the eleven days leading up to Hurricane Katrina, following the life of Esch, a pregnant teen in rural Louisiana who is obsessed with the story of Medea and her neighbor, Manny. Esch is surrounded by boys trying to emulate men. Her older brother Randall is a promising basketball player, practicing every day and putting off knee surgery until he knows he's secured a college scholarship. Junior, whose birth brought on their mother's death, has a mind “like a colander,” and endlessly tags along. And Skeetah, one year Esch's senior, has eyes only for his pit bull, China, who he cares for as lovingly as a father in the same breath as he champions her ability to hold on to another dog's neck until it is dead.China gives birth to puppies early in the story, and later kills one of them. Parenthood, both neglectful and brutal, is a theme throughout the story. Pregnant and barely out of adolescense, Esch is bereft of a model female influence, her mother having died nine years earlier. As for the male parental figure, Esch's father is a drunk, obsessed with hurricanes; he is a peripatetic and vinegar-scented presence in his children's lives. At times, Ward emphasizes her themes with a hand that errs on the side of heavy. In the world of Salvage the Bones, motherhood is brutal, terrible, and simultaneously wonderful, and no opportunity is wasted to demonstrate it. One character remarks that all the worst storms are women, beautiful and terrible to behold, bringing with them wreckage and transformation. The township that Esch and her family and friends inhabit is the “Bois Sauvage,” the “wild wood” without authority figures and with few constraints. And then there is the matter of that puppy. Sometimes-belabored themes aside, Salvage the Bones is suffused with truly beautiful writing. Encountering Manny, the boy with whom she has been sleeping and who is the father of her unborn child, Esch thinks:


I wonder if Medea felt this way before she walked out to meet Jason for the first time, like a hard wind come through her and set her to shaking.

After her brother Skeetah attempts to rob a white family for medicine for China:


We live in the black heart of Bois Sauvage, and he lives out away in the pale arteries, so I don't think he will ever come here, swinging his cane like an axe...

Esch and her immediate circle are fully and sensitively drawn. Characters like Shaliyah, Manny's menacingly steady girlfriend, exist mostly as caricatures in the background, but Skeetah and Randall and Big Henry and Junior are solid and compelling. Each chapter is a day, and through them pass the names of the storms that didn't destroy the Gulf. Skeetah's dogfighting can bring up conflicted feelings. Michael Vick's $100 million contract came to mind reading about Skeetah's efforts to get China better dog food, the care he takes of her as she gives birth, his concern over the health of her puppies, so great that he would rob a neighboring family that he knows has the medicine he needs--tenderness, entirely at odds with the narrative of dogfighting that exists in our consciousness today. Like Chekov's gun, there couldn't be a fighting dog without a dogfight, and the one that Ward gives us towards the end of the story, as the wind is beating down, wet and close, is a masterfully-rendered scene of tension and violence. Growing up in Houston, I'm sure I've lived through an actual hurricane. The only one I can remember wasn't a hurricane, though, it was a tropical storm-- Allison, in the summer of 2001. Highway 59, newly remodeled and criss-crossed with concrete, “moderne” looking bridges, flooded nearly twelve feet, and several of my friends had up to four feet of water in their houses. For Ward, the storm is also a mother, like Esch, and like China:


The murderous mother who cut us to the bone but left us alive, left us naked and bewildered as wrinkled newborn babies, as blind puppies, as sun-starved newly hatched baby snakes. She left us a dark Gulf and salt-burned land. She left us to learn to crawl.

And amid the phrases that have become clichés in the wake of a hurricane- “It's all gone”- Ward gives us the hope and relief of the storm's aftermath, in “people in the street, barefoot, half naked, walking around felled trees, crumpled trampolines, talking with each other, shaking their heads, repeating one word over and over again: alive alive alive alive.”Jesmyn Ward is a former Stegner Fellow (Stanford University), and the Grisham Writer in Residence at the University of Mississippi. She is an assistant professor of Creative Writing at the University of South Alabama. Her work has appeared in BOMB, A Public Space and The Oxford American.