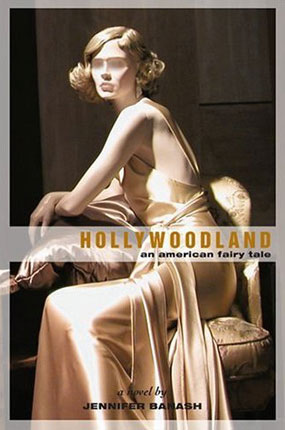 Impetus Press, August 2006
$17.95, 353 pages
Will Alice find her way out of the looking glass? Will Sharlene find her way out of her world of mirrors where everything depends on the quality of her own reflection? We fear that like the original Grimm fairytales, this one won't end happily: when Jennifer Banash's novel Hollywoodland opens, her heroine Sharlene is in a coma, the result of an attempted suicide.

From there, the book then looks back over Sharlene's life, specifically, her climb to fame. She hungers to be a star and, essentially, to be loved, which leads her to have affairs with a photographer, a rock guitarist, and a female porn star. Eventually, she moves into her own big house at the top of a hill. Her adventures are interspersed with passages from Alice and Wonderland and other fairy tales that portray Sharlene at the mercy of her world. For example, after her rock star boyfriend leaves for a six-week tour: "'You ought to be ashamed of yourself,' said Alice. 'A great girl like you to go on crying this way! Stop this moment I tell you!' But she went on all the same, shedding gallons of tears, until there was a large pool all around her, about four inches deep and reaching half down the hall." This fanciful aspect is the sugar that helps send Sharlene's painful desperation smoothly down our throats.

Sharlene sheds her former identity as a nondescript girl from an old mining town who once took refuge in a dark movie theater. She becomes Sierra to satisfy the demand of a video producer who wants her name to be more exotic, and she transforms herself to suit her name. Sierra moves up in the porn world, and her stardom leads her to one of the most powerful men in the US: the President. After a brute sexual encounter in the Oval Office, she lives to get back into the President's arms. She imagines that he fulfills an emotional need: "She is limp and vulnerable in his arms. He is hope and desire. Acceptance and respect. The fulfillment of her destiny." But instead he instigates her downfall, leaving her in a far worse place than when she met him.

Hollywoodland is a promising first release for Impetus Press, a press that strives to bridge the gap between commercial and experimental fiction. In addition to providing an enchanting story, the details are lush. The narrative takes us through a world that is at times vivid and at others full of soft blurry edges, the words sliding through our consciousness like the bubbles in a glass of Cristal. Banash also expertly captures the voices of the stream of acquaintances who renounce responsibility for Sharlene's suicide attempt, beginning with the first man who left her-her father. In their testimonies to the investigators into her suicide, none want to admit that they added to her despair. In her coma she is as alone as she was in life, yet all she ever wanted was to be loved.

Jennifer Banash was born and raised in New York City. She graduated with a B.A. in Fine Art from Arizona State University and has worked as a copywriter, editor, waitress, television news writer, party promoter, and exotic dancer. She lives, works and writes in Iowa City, Iowa, and is a doctoral candidate in English at the University of Iowa. In August 2005, she co-founded Impetus Press with her partner, Willy Blackmore. Her poetry has been published in Black Spring Review, Poetry Motel, and The Colorado Review. Her first novel, Hollywoodland: An American Fairy Tale, is published by Impetus Press.