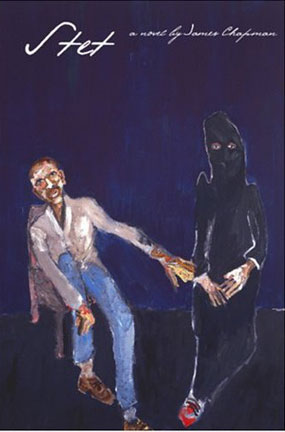 Fugue State Press, January 2006, 336 pages, $16Stet is the story of a Soviet filmmaker who might really be-at least to Authority, and to the imposed and imposing tastes of the lumpenproles-no filmmaker at all. For reasons perhaps only slightly more official than personal, this Stet has made more movies in his own head than he has on celluloid, for the censorious delectation of the Party and its State. He's born late in the book, suffers at the hands of children, grows up, suffers at the hands of adults, then falls afoul of the Nomenklatur until finally, he's exiled out to a workcamp, to be joined by his wife, Lilya, where they less die than fade to black. This, however, is surface only: an "official" reading would have you parsing Stet as a typical novel of experiment, rootless and rangy, formalist in its manic formlessness, and as emotionally tough as concrete.

But under the Work, is the Life. And ultimately, Stet is art about why James Chapman makes art, and an argument for why we lesser lights should make art, too. Stet is the Life and Times of every artist to ever make something "wrong" in the face of everything "right," which might be symbolized by the Order of Lenin, or the New York Times Bestseller List. Otherworldly success, at the end of the book, isnothing less than the gulag. A grave in Murmansk. All that, with your work destroyed, too.
Which is not to say that Stet is merely reactionary. It's more like a proofreader's, or copyeditor's, "stet"-an editing mark designed to retain the original version of something, scrapping later efforts at change. This idea is somewhere between the Beat-Zen first-thought-best-thought and the slow acceptance of the self for who and what it is, "becoming comfortable in your own skin."
Six novels in, it seems that Chapman has made a career out of this becoming. Glass (Pray the Electrons Back to Sand) (1995) was a Gulf War novel, condemning American imperialism in the most intimate terms possible. In Candyland It's Cool to Feed on Your Friends (1998) was a painful airing of an urbis semioticized, hermeneutered, totally fucked: life as performance art, the private as a pretext to matinee angst. Daughter! I Forbid Your Recurring Dream! (2000) was quietly madder than anything else that had come before-an undomesticated transcript of smalltime, small-town nowhere as lived by a woman almost incapable of being a "herself."
Stet reprises the responses to the Official Lie, which is universal: the lie that says creators can become free of the societies they create and that create them, the lie that says art is made sacred with time as the test, the lie that says criticism in the voice of loose change-in a manner that damn near reaches summation on American soil. It is a book written by a mystic in sneakers, and is among the most outraged and sad we've had from our own-lesser-gulag Downtown. It tells us that if we don't represent our own damage in art, then all the Job-comforters and their mini-biographers, the squinty presidents and their multinational kitschmeisters will do it for us. They have their red pens to keep their books in the black. We have Stet.

James Chapman is the author of six novels, including Daughter! I Forbid Your Recurring Dream! and In Candyland It's Cool to Feed on Your Friends. He lives in Manhattan with his wife, the novelist Randie Lipkin.

Joshua Cohen was born in Southern New Jersey in 1980. He is the author of The Quorum (Twisted Spoon Press, 2005), and the forthcoming Cadenza for the Schneidermann Violin Concerto (Fugue State Press, Summer 2006). A translator and editor of BLATT (http://blatt-blatt.blogspot.com), Cohen's essays appear regularly in The Forward. He lives in Brooklyn, NY.