IT'S FINE BY ME by Per Petterson 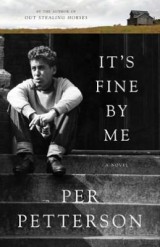 It's Fine By Me (Graywolf Press) is a familiar story of a tough kid, a menacing father, and a lonely and often brutal coming of age. The plot is a good fit for Per Petterson's brusque style and Norwegian heritage; the country's cold and unforgiving landscape is as well suited to the novel as it is to Audun Sletten's steely demeanor. Audun is a protagonist who has painfully earned his teenage angst, primarily through his early years with a drunken, violent and ultimately absentee father. Petterson proudly acknowledges his debt to Jack London and Ernest Hemmingway throughout Fine; Audun and his best friend Arvid Jansen (who appears in several other Petterson novels) are infatuated with the writers. They see themselves in their manly, introspective stories; more importantly, such literature allows them to imbue some romance into their grey working-class lives. Of course, Audun wants to be a writer; he sees it as a way to both fully own and transcend his circumstances. Looking down at a row of local writers' houses, he observes:

“Like birds on a wire, they sit in their windows looking up to the sky with the sun on their faces, holding on to the secret, and I envy them so furiously it makes my legs tremble.”

But childhood dreams and passions are often expended in imaginations, never realized, and Patterson excels in showing how Audun's ideals do little to pull him from where he was always going. He uses Jack London's life story to justify dropping out of school for a job on a printing press (the source of the story's most violent and funniest scenes), and girds himself proudly for Hemmingway-esque fights that occasionally deliver blood and broken bones but never bring catharsis. Before one fight he tells himself:

“This is the moment I have to rise out of myself and become someone else: Martin Eden or Jean-Paul Belmondo...it will be all right.”

Of course, it doesn't quite end up all right for Audun, but as one of his idols famously wrote, he gets what he needs. By the end of Fine, Audun has gained a new maturity, having learned after a few mistakes and a few glimmers of happier families the value of stability. It is Petterson's best trick that his protagonist's turn can be so sudden but still truthful. It's Fine By Me was recently translated and published by Graywolf, but it was originally released in 1992—well before Petterson's breakout hit Out Stealing Horses. It feels that way: this book occasionally reads like a careful exercise in a story and style that Peterson had to master rather than a vital piece of literature. Still Petterson fans--and angsty tough guy teenagers--won't be disappointed.Per Petterson is the author of five previous novels, including Out Stealing Horses, In the Wake, and To Siberia, which have established him as one of Norway's best fiction writers. Petterson was born in Oslo to a working-class family. He has worked as a manual laborer, spent twelve years as a bookseller, and was a translator and literary critic before becoming a full-time writer. Out Stealing Horses won the 2007 International IMPAC Dublin Literary Award, the largest international prize for a work of fiction written in any language and published in English, and was also named one of the best books of 2007 by the New York Times Book Review and Time.