Ian Frazier's GONE TO NEW YORK: ADVENTURES IN THE CITY 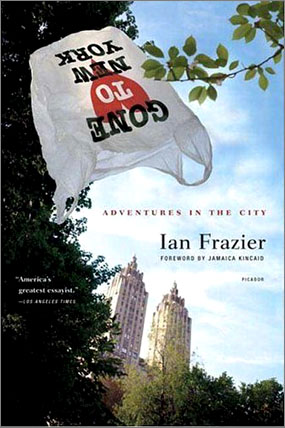 Picador, August 2006
224 pages, $14.00
In the essay collection Gone to New York, Ian Frazier delves into New York City just as an explorer from a far-off land would study an exotic locale. Having hitchhiked there in the early 1970s from his native Hudson, Ohio, where only the "church steeples were higher than the trees," Frazier's curiosity served him well when he became a writer for the The New Yorker, embarking on adventures that inspired the "Talk of the Town" pieces and longer works compiled here. As a new arrival, Frazier journeyed around the modern, urban world in an effort to find both a connection to the strange land beneath his feet and a reminder of happy times in Hudson, where he once had the bittersweet feeling that he "would never be even a tenth as at home anywhere again."

Frazier's humorous day-trips take on a distinct pattern. He maps his terrain, charts his course, and then reports the details of the geography neighborhood by neighborhood. His observations roll out in series, such as the sights out of the subway window that "slide by like quickly dealt cards" in "Take the F," or the diverse inventory available in "Someplace in Queens"-a borough "shaped sort of like a brain"-where "legally, you can buy wigs made of human hair...and two-hundred-volt appliances designed to work in the outlets in foreign countries." In the shorter pieces, Frazier appears in various scientific guises-as a city planner-cum-mechanical engineer, fighting an urban blight with an invented device for plucking stray plastic bags out of trees, or as a cartographer, determining that there is, in fact, no spot in New York where you can literally dig to China. But it is in the longer pieces like "Out of Ohio" and the masterpiece "Canal Street" that the book takes its place next to other great narrative works on the city, such as The Colossus of New York by Colson Whitehead and E. B. White's long essay Here is New York.

"Canal Street," in particular, highlights the imagination, humor, and empathy in Frazier's terrific writing. In it, he travels the road that "jury-rigs Brooklyn to New Jersey" from the East River to the Hudson, stopping by the army-navy store owned by his hilarious Romanian landlord Gary (who's Jewish, but "has an alternative set of business cards printed with an Arabic-sounding alias to give to people who might not like Jews.")

Finally reaching the western edge of Manhattan, Frazier then burrows into the history of the Holland Tunnel, which is described by a plaque beneath a bust of its engineer, Clifford Holland, as "the underground highway which joins a continent to a city." Throughout Gone to New York, Frazier's yearning for his former life far beyond the tunnel is often exposed in the most unexpected of places: in the essay "In the Stacks," he notes that "libraries generate longing. It collects in the shelves and rustles under the desks and zaps people like static electricity." His book will zap readers just the same with its humanized, optimistic portrayal of the city, and of a reluctant Midwesterner drawing the difficult conclusion that New York has become his home.

Ian Frazier is the author of Great Plains, The Fish's Eye, On the Rez, Family, as well as Coyote v. Acme and Dating Your Mom. A frequent contributor to The New Yorker, he lives in Montclair, New Jersey.

Doug Diesenhaus is a freelance writer living in Brooklyn. His book reviews and writing have been published in Poets & Writers Magazine, Publishers Weekly, the Virginian-Pilot newspaper, and the Mid-American Review.

The Fish's Eye by Ian Frazier