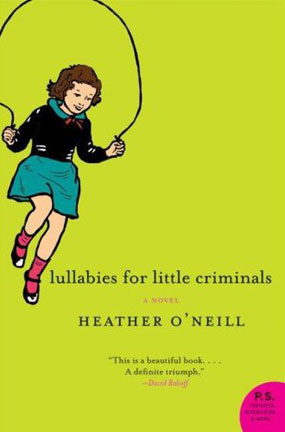 Lullabies for Little Criminals by Heather O'Neill is a hilarious and heartrending look at the life of a teenager navigating the critical transition between child and adulthood. The story follows thirteen-year-old Baby on the rough streets of Montreal, as she psychologically morphs from an immature 9-year-old to a dissolute seventeen in the space of a year.

The novel spends a lot of time on Baby's father, Jules, who is both lovable and despicable. At first, Jules is a loving junkie dad who shares playful rituals with Baby, like kissing her seven times for good luck before parting. Reading about Baby's father describing his childhood is like listening to your favorite drunk babble: "We had fried snowballs for dessert. I had one toy. It was a chair. My mother put a wig on it and told me to pretend it was a horse. I'd take my chair outside and ride it." But the book descends into a social worker's nightmare when Jules is sent to rehab after being charged with heroin possession, returning sober and terribly mean.

O'Neill introduces remarkably vivid characters: there's an unforgettably cool Linus Lucas, destructive but big-hearted Trevor, nerdy Xavier, and the handsome but violent pimp Alphonse. Although O'Neill depicts these characters carefully, they are vignettes without permanence, carefully rendered and then ripped out. No one seems to last in Baby's hyper-developing life.

In Lullabies, O'Neill unleashes her talent for painting visceral experiences with simple words. Her descriptions of heroin-induced hallucinations are fascinating: a marble found on the ground contains a tiny horse, pigeons converse in flawless French, a cricket is "nothing but a safety pin that believed in God." The descriptions are so engaging they take the readers into a trip of their own. But the frivolity and fun of Lullabies turns decidedly gloomy as the adulteration of Baby accelerates, and the effect seems heavy-handed. O'Neill's strength lies in absurdist comedy and levity, not piteous accounts of destitution. She's at her best when writing plainly, because the circumstances she describes are so powerful and quietly sad. For instance, when Baby receives a note full of death threats, she is so starved for attention that she carries it "around like a poem" in her pocket. Baby's self-reflection towards the end of the novel is heartbreaking. "Some people even smiled at me as I walked by. They didn't know. How would they know I was a messed-up, ragged, dirty, nasty thing?"

The most impressive part of Lullabies is the way O'Neill captures the magic and joy a child's imagination can conjure even in the bleakest situations. She depicts squalor with humor, panache , and pride. O'Neill carefully renders the very palpable personality of a too-young thirteen-year-old -- over-confident, under-ripe, and vulnerable, fluttering precariously towards adulthood.

Heather O'Neill has lived in Virginia and Montreal. She is a spoken word artist, musician and writer, widely published in journals as well as widely known on the Eastern Seaboard for her spoken word performances. She has recently completed the screenplay for the film St. Jude, directed by John L'Ecuyer, and is currently working on a book of fiction, The Romeo Hotel.