Though lacking an overarching story, the book covers the major phases of the protagonist's life, and is held together by motifs – the father's trips to the bar, a girl with a small red mark on her cheek, excursions into nature, and sexual fetish. 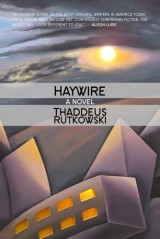 Thaddeus Rutkowski's Haywire is composed of 49 pieces of painful and funny flash fiction narrated by the son of a Polish-American father and a Chinese mother. Though lacking an overarching story, the book covers the major phases of the protagonist's life, and is held together by motifs – the father's trips to the bar, a girl with a small red mark on her cheek, excursions into nature, and sexual fetish.Haywire could also be a pseudo-memoir. The narrator shares much of Rutkowski's background, including his divided ethnic heritage and a childhood in Pennsylvania, and we eventually find out that the name on his passport is Thaddeus.Thaddeus's father dominates his youth. He is an alcoholic artist, often unemployed, who guides Thaddeus on nature expeditions, has rash ideas about home schooling the kids, lets the narrator drive his public library truck, and in a fit of rage damages the family's precious Frank Lloyd Wright cabinet. The mother, who talks about the ancestors, prepares leftovers for dinner, and goes to work, is little more than a shadow. When Thaddeus is in college, the complications of his identity – split by his mother's stories of her past in China and his father's attempts to immerse him in Polish culture – come to a head:

In my paper, I wrote that my biracial self lived in an off-campus apartment with a white guy. I didn't live in a co-op house with other Asians. I was definitely interested in dating Asians, but any such date, I knew, would be interracial. Similarly, any date I had with a Caucasian would be equally interracial. I wanted to get outside the self, to live in the world of the other, but I had no idea how to do it. In my case, the self was totally divided.

As an adult, Thaddeus works boring office jobs, applies for teaching jobs, temporarily works for a newspaper, and freelances. But we know, because of a hilarious passage satirizing a poetry reading – one of my favorite passages – that he has an interest in writing. Eventually he meets a woman and has a daughter, but the household situation remains vague. Throughout Haywire, we get the feeling that information is withheld. Yet there are paragraphs that can stand on their own as works of fiction. If the story of Thaddeus's life is vague, there are many complete stories within the forty-nine stories that make up the book.And the sentences themselves are stunning. It's their rhythm that really guides us through Thaddeus's experiences. Each painful situation is balanced by with humor, and Thaddeus and the reader learn to laugh along with each other.

Thaddeus Rutkowski is the author of the novels Tetched and Roughhouse. His website is: http://www.thaddeusrutkowski.com.