It's too bad for Kayankaya that he lacks the snap of his name, and isn't able to hold his own even in an exchange with his physician. 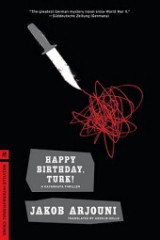 Does anyone remember the plots of detective novels? According to legend, not even their authors. It's said that as they filmed The Big Sleep, Humphrey Bogart and Howard Hawks, as confused by all the double-dealing as audiences would later be, called Raymond Chandler to clarify whether a character had met his demise by murder or suicide – and Chandler confessed he wasn't sure. But if we forget the crimes Philip Marlowe solves, we don't forget Marlowe. It's a very specific, very convincing hero who remarks, while dragging a corpse, “Dead men are heavier than broken hearts,” and who describes an old friend as having eyes “like holes poked in a snowbank.”Kemal Kayankaya, the private-investigator-protagonist of Jakob Arjouni's novel Happy Birthday, Turk!, has two things going for him in his bid to join the ranks of Marlowe and Spade: his name and his doctor. Kemal Kayankaya almost makes your tongue click – it's a wisecrack itself. His doctor is as fed-up yet forbearing as we expect professionals to be – when Kayankaya wakes in his clinic after being beaten, the doctor lets the restless detective try to get to his feet, only to see him fall to the floor, then deadpans, “I see you're a private investigator. That seems to be a strenuous profession.”It is. And it's too bad for Kayankaya that he lacks the snap of his name, and isn't able to hold his own even in an exchange with his physician.Kayankaya is asked to investigate a case as banal as most in crime fiction. A recent widow shows up at his office, frustrated that the police don't seem to be taking the murder of her husband seriously; Kayankaya discovers that the husband was dealing heroin and follows his trail into Frankfurt's red light district; predictably, he begins to suspect that there's more to the police's lack of effort than typical official indifference. But if we re-read The Big Sleep we'll find that it was all only about some blackmail among some very rich people. And yet that didn't matter – or, Marlowe's voice made it all matter.Kayankaya has the attributes of a hard-boiled detective. He lives alone; he drinks heavily; he irritates the police; he breaks the law when he has to; he gets beaten up by henchmen but continues to ignore their threats; he gets sentimental about women but nevertheless ignores their warnings; in the end he's as exasperated by his job as he is satisfied by it. But does he sound like a detective? His narration begins:

There was an unbearable buzzing in my ears. My hand struck, time and again, but its aim was off. Ear, nose, mouth – mercilessly it attacked them all. I turned away, turned back again. No way. This was murder.Finally I opened my eyes and located the damned fly. Fat and black it sat on the white coverlet. I took proper aim, then...

This is someone trying to sound rumpled. He can go on to tell us all about his hang-over if he wants to – I'm going to wonder if he's ever had a drink in his life. Nor am I going to buy his sordid lifestyle when he remarks that when he opens his apartment door, “a blend of kids' pee and fried potatoes assailed my nose.” And he suggests adolescent prurience, not jadedness, when he steps out into the hot city and notes:

The sex-shop signs proclaiming “Moist Thighs” and “Sweaty Nymphomaniac Nymphets” did not seem all that enticing.In this weather, everybody's thighs were moist.

I don't even believe the heat.Kayankaya's diction is wrong – weirdly formal and stilted (“assailed”? “proclaiming”?). You see the jokes coming a long way off. The irony is too easy to be world-weary. The book reads less like an account by a private investigator than an imaginative story by someone who would really like to be one.One aspect of the book is potentially of interest. Though the story is set in Frankfurt, Kayankaya is Turkish, as is the family of the man whose murder he's investigating. It could be valuable, on a historical level, to see the racism suffered by Turkish immigrants in 1980s Germany. But even the insults Kayankaya suffers feel at once underdeveloped and overdone – when a passerby Kayankaya bumps into sees the detective's dark complexion, he shouts, “No speaka da lingo, eh?” And the book doesn't contain any subtle analysis of how racism might effect Kayankaya's life or profession. And when the plot begins to accelerate in the second half, the subtext of racism simply fades away.What Happy Birthday, Turk! demonstrates Chandler, in his essay on detective fiction “The Simple Art of Murder,” put best:

The realistic style is easy to abuse: from haste, from lack of awareness, from inability to bridge the chasm that lies between what a writer would like to be able to say and what he actually knows how to say. It is easy to fake; brutality is not strength, flipness is not wit, edge-of-the-chair writing can be as boring as flat writing; dalliance with promiscuous blondes can be very dull stuff when described by goaty young men with no other purpose in mind than to describe dalliance with promiscuous blondes.

Compare the gruff bluntness of this literary criticism with the uncertain prose of Happy Birthday, Turk!, and there isn't any doubt that Chandler knew what he was talking about.

Jakob Arjouni, born in Frankfurt in 1964, has written novels, plays, and screenplays. His novel Magic Hoffman was shortlisted for the IMPAC Award. Other novels in the Kayankaya detective series, including Kismet and More Beer, are available or forthcoming from Melville House.