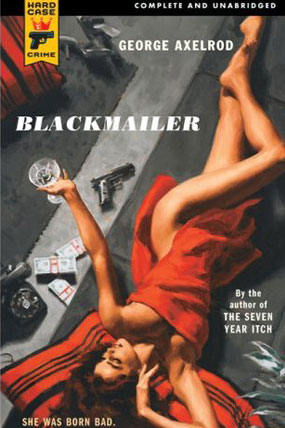 One thing that unites crime stories, noir fiction, and other good pulps is velocity. They're short and swift, grabbing you by the lapels and keeping you turning pages long past your bedtime. George Axelrod's Blackmailer from 1952-the latest out-of-print reissued by Hard Case Crime-is faster than a spray of bullets. The book barely filled a four-hour round-trip between on MetroNorth New York and New Haven.

Axelrod, who died in 2003, was perhaps best known as the screenwriter who penned such Oscar-nominated films as The Manchurian Candidate and Breakfast at Tiffany's. He was exceptionally prolific-he wrote over 400 radio and television scripts-and his ear for crackling dialogue is evident in this book about one of the most familiar refrains in crime literature: greed.

Truth is a foreign currency in this fast-paced story. Axelrod's colorful ensemble centers around a Hemingway-esque author, Charles Anstruther, who, while writing his next best-selling novel between drinks, accidentally kills himself while cleaning his hunting rifle. Now urbane Manhattan impresario Walter Heineman competes with Janis Whitney, a washed up Hollywood starlet, to publish the book first for a significant chunk of change. Is the manuscript itself a myth? And to what deadly, double-crossing lengths will each go to claim this literary prize? And how will the fiery Jean Dahl-prostitute and blackmailer-tip the scales?

At the center of the mayhem is Dick Sherman, co-editor of a small publishing house in New York City. Much like Edmond O'Brien in Rudolph Mate's classic film noir D.O.A., Sherman is an ordinary man quickly thrust into circumstances beyond his reach. His own ambitions to see the manuscript published entangle him in a web more dangerous than he ever expected. Sherman is beaten, threatened, laughed at, and humiliated; his home is destroyed, and people around him are injured or killed. Unable to go to the police because of his own increasing involvement, Sherman sets out on a solitary mission to find the manuscript before more deaths occur.

From Hollywood's movie industry to New York's publishing world, Blackmailer paints a grim portrait of America's obsession with fame. Heineman's house is equipped to spy on its guests through the use of two-way mirrors and audio recordings, and many of the characters lie for advantage-about their identities, about their alliances. With Anstruther's manuscript Axelrod paints a grim portrait of those industries predicated on artifice.

Sherman comes out ahead in the material world by the end of Blackmailer, although a heavy personal price has been paid. An ordinary publisher has faced personal danger as well as the destruction of a few ideals-all for the sake of a book. Were these Herculean trials worth it? Axelrod deftly lets the reader decide. Like Sherman, we all make sacrifices towards the fulfillment of our dreams, although we don't often go to such sinister ends as those found in Blackmailer.

George Axelrod (1922-2003) wrote over 400 television and radio scripts, and is well know for his work in film. He is the author of The Seven Year Itch, later made into a film by Billy Wilder, as well as the screenwriter of Breakfast at Tiffany's and the Oscar-nominated The Manchurian Candidate.

Brendan McCall is a writer, director, and choreographer based in New York City. He is on the faculty of the Yale School of Drama, the New School for Drama, and the New York Film Academy. Currently in pre-production for directing his first film, in New York.