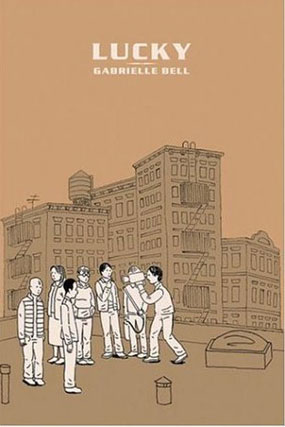 Drawn & Quarterly, November 2006
112 pages, $15.96
Gabrielle Bell's autobiographical, award-winning minicomic, Lucky, is now an elegant hardback thanks to Drawn & Quarterly. In Lucky, Bell shapes her everyday experiences into short stories about apartment woes, crappy jobs, and picnics in the park. Included are a few extra stories and an enthusiastic intro that graphically describes the evolution of Lucky and the accident (irrevocably losing issue number two at an airport), which proved an unexpected, yet encouraging artistic stimulus for Bell.

The first two chapters of Lucky, comprised of issues one and two, focus on Gabrielle and her boyfriend Tom's housing search in the crazy New York City rental market, and their struggle to remain financially sound. The diary format is a lot stricter in these first two issues, as each story is a dated entry and Gabrielle's struggles-the hassles of roommates and relationships, her insecurities about her art, and the torture of mindless jobs-fold on top of one another as the pages go by. Bell harnesses the anger and frustration of small humiliations in a story about encountering a boorish male comics "fan." She depicts his moronic ramblings about women cartoonists with a cutting exactness, making the return to somber self-reflection in the final panel a bit of a disappointment.

Bell marks a positive change in her writing with issue three. In her introduction she remarks that although she felt the subject matter was too revealing, she decided to publish it at her friends' urging. Her friends were on point: this issue won the Ignatz award for "Outstanding Minicomic" in 2004. One memorable story riffs on the collision of Bell's Francophilia and her experience teaching cartooning to two precocious French preteens. To their delight, the boys' sexually-charged teasing-Brother one: "You don't know how to draw a 'vag-in-a!' It has a thing at the top here!" Brother two: "I know! I'm drawing the view looking out from inside the 'vag-in-a!'"-makes Gabrielle painfully uncomfortable, and the effect is hilarious.

In fact, Lucky is at its best when Bell steps outside of her daily routine. With that distance, her exceptional gift for capturing intense moments-whether funny, poignant, or just bizarre-is striking. Such is the case in "Mom," where Bell imagines herself as a young girl, trying to understand a mysterious adult world. When she sees her mother reading silently, she demands that her mother "read it for real." So Gabrielle's mother reads a story of ornate and twisted love aloud, and we see a young Gabrielle return to her toys, aware that she had trespassed into a place she was not ready for.

The black-and-white illustrations in Lucky are spare and elegant, yet amazingly evocative. Though Lucky is driven by dialogue and Bell's explanatory notes, her lines convey emotion and action with seeming ease. When she steps up background elements, such as in the art- and nature-filled story that starts issue three, the extra details are a pleasant addition to Bell's exploration of the tension between the self and the confusing, inconsistent world in which she dwells.

Gabrielle Bell is responsible for the Book of... series: Book of Insomnia, Book of Sleep, Book of Black, Book of Lies, and Book of Ordinary Things. She has contributed to publications such as Stereoscomic, Bogus Dead, Orchid, and Shout! Magazine. She lives in Brooklyn, New York.

Carrie Jones is a freelance writer in New York. She is a Senior Web Editor for Topic Magazine, a quarterly publication of nonfiction, first person nonfiction and contemporary photography. Her writing has appeared in The Village Voice, Bookslut and ruinedmusic. She blogs about reading and writing at try harder.