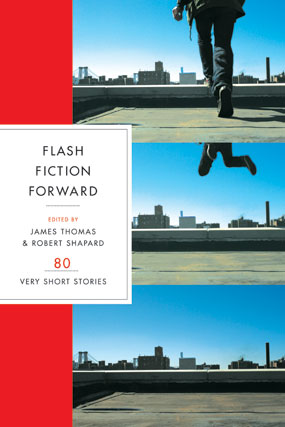 W. W. Norton, August 2006
320 pages, $15.95
Flash Fiction Forward, edited by James Thomas and Robert Shapard, is the newest compilation of flash fiction in an already well-populated category of anthologies. Almost twenty-three years after the release of their first collaboration, Sudden Fiction, the editors have tightened guidelines-all stories must now be under 750 words-piecing together a stylish collection of stories from esteemed authors like John Updike, Rick Moody, and Paul Theroux. The stories' subjects, themes, and characters could not be more disparate, but with the guidelines set forth, similarities arise in their utilitarian concision.

The eighty stories that total Flash Fiction Forward deal with matters of love, loss, redemption, and failure, not unlike their lengthier counterparts. Mutants swim among dead fish in Stacy Richter's "Tiffany," while less fantastical stories like "Baker's Helper" by Cynthia Anderson and "The Good Life" by David Ryan look at human relations and the sadness space can generate. Hannah Bottomy's "Currents" is told in converse succession, whereas the assassination in Ismail Kadare's "Before the Bath" is written using almost identical sentences, forming four variations of déjá  vu before the story actually completes itself.

Although the short-short story is an old form, its stirring revival in the eighties brought forth a renewed interest in minimalist fiction. The refractory style is not appealing to every reader, as history, motivation, and social or political influence are often left out or reduced in order to create a rapid dramatic account. Each word must be chosen with gravity, and for its resonance, shifting the focus away from the brevity of the piece. And because the structure leaves minute room for exaggerated detail and fancy prose, any risks the characters may take are hardly comparable to that of the writer.

At times the style approaches prose poetry. Writers like James Tate and Grace Paley triumph in the simplicity of the structure, having reduced concepts and condensed narrative for years in poetry-a form habitually insisting on the absolute minimum-possibly giving them an advantage when writing such compact and lyrical fiction. This same lyricism can be seen in the final moments of Dave Egger's "Accident," when, "In a moment of clarity, you finally understand why boxers, who want so badly to hurt each other, can rest their heads on the shoulders of their opponents, can lean against one another like tired lovers, so thankful for a moment of peace."

Flash Fiction Forward contains a wide range of authors, some at the beginning of their careers, some already established and revered. Lesser-known writers such as Kirk Nesset and David Galef hold their own next to literary giants like Robert Coover, Lydia Davis, and A.M. Homes. Even Jack Handey, most often recognized for his work on Saturday Night Live, has included "The Voices in My Head," a satire of his subconscious.

The editor's note states, "to finish flash fiction, you shouldn't have to turn the page more than once." James Thomas and Robert Shapard have compiled a series of stories that not only fits their theory, but thrives in it. Although it would be hard to read the book in one sitting-with so many characters, narratives, and backdrops to keep track of-just about any story in Flash Fiction Forward is a perfect-sized bite of literature for a subway commute or wait in line. But it's also pleasurable enough to read without the excuse of consuming time.

Thalia Aurinko-Mostow is currently finishing her B.A. in creative writing at The New School. She completed her first novel, which received glorious praise from her grandmother, earlier this year, and has recently begun work on a second. She lives in New York.
flash_fiction_f.