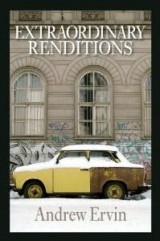 Why would I read a book by a young American writer about what it's like to be an old Hungarian composer? Especially an old Hungarian composer who was at Terezín?After reading Andrew Ervin's first novel, Extraordinary Renditions, I still can't tell you. The book is comprised of three novellas that intertwine in Budapest sometime after the United States' invasion of Iraq. The first follows Lajos Harkalyi as, after decades spent teaching and composing music in Philadelphia, he returns to his native Hungary to premiere a new orchestral work – one that weaves into its final section the melodies he remembers his parents humming to him before he was sent, as a boy, to a concentration camp. The second begins at an American military base outside of Budapest, where an African-American soldier nicknamed Brutus is having an affair with Harkalyi's daughter – until his corrupt commanding officer coerces him into delivering illegal weapons to the capital. The third concerns Nanette, a young American violinist who has been living in Budapest for several years, and who is trying to control her nerves before performing in Harkalyi's concert.The book, which opens with Georg Lukacs' famous quote “Who will save us from the West?”, examines the influence of Western capitalism on post-Soviet-bloc Eastern Europe. But whatever insights Ervin might be able to offer us are instantly undermined by his clumsy ventriloquism. Ervin doesn't make the mistake of trying to tell these stories in the first person; yet he keeps the third-person narration so close to the perspectives of his three protagonists that the writing is – as it has to be – inflected by them. You wouldn't have to know anything about Ervin to realize that the author of this book isn't Hungarian, African-American, or a musician – you encounter melodrama, clichés, and the blunt, simplistic conclusions typical of those who didn't live through what they're trying to analyze. It isn't convincing when the Hungarian composer recalls how writing music for a concentration camp orchestra affected his style:


He assigned all of the parts to all or to almost all of the musicians simultaneously, with only slight variations in form or timbre, so it didn't matter if he only had three violins or if his oboist had been shot or even if there were no cello strings to be found within fifty miles...The rapid turnover of musicians made it difficult to orchestrate precise melodies, so Harkalyi taught himself a unique compositional style...

Or when the African-American soldier thinks about life in the military:


Brutus typically didn't mind the M.P.'s too much. He could handle them just like any pigs back home – yessuh, nossuh, anything you say, sir – or pop one and watch the rest scatter. But he certainly didn't want to get tangled with any corrupt elements of the corps, not if it could be avoided. They were a mean bunch of motherfuckers.

Or when the young violinist worries about her next performance:


She knew, deep down, that some day people would catch on to her – they'll discover the truth that she was a fraud and did not possess even the vaguest hint of musical talent. It was certain to happen. It could happen today.

Or maybe this book and I simply weren't meant for each other. I'm not interested in how a modern American novelist imagines a Holocaust survivor remembers his past; in how a white novelist imagines an African-American soldier feels about the military; or in how a novelist imagines musician experiences music. It seems to me that if Ervin wants to explore how one culture can appropriate another, he'd be better off turning away from Budapest and looking at his book.Andrew Ervin has written for The New York Times, Philadelphia Inquirer, San Francisco Chronicle, Chicago Tribune, Washington Post, USA Today, and The Believer. His website is: http://andrewervin.com.