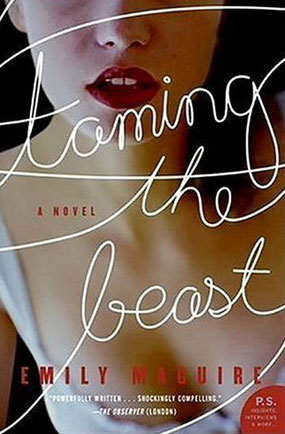 Harper Perennial, September 2006336 pages, $13.99A fierce student-teacher affair forms the core of first-time novelist Emily Maguire's Taming the Beast. Encasing this passionate narrative is a bold statement in modern gothic fiction: modern love is sadistic and satisfying, whilst true love as the wholesome ideal, is a convention left questionable and foreign. Maguire develops 14-year-old Sarah Clark amid a sprinkling of literary influences; with the violent passion of Jane Eyre and the subtle artistry of Wuthering Heights, her debut may mark out a new space on the shelf of classics in this genre.

From the onset, the reader is thrust into a microcosm of reality-Sarah's sexual sphere set in a western suburb of Sydney. It begins when her 38-year-old English teacher, Mr. Carr, seduces the ultra-receptive Sarah. She is "turned on" and an affair ensues that becomes masochistic and obsessive. In a fit of morality (he is married with children) Mr. Carr transfers schools and moves away. Yet his departure does not leave Sarah "turned off." The three-hundred pages that follow chart the next seven years of Sarah's life: her animalistic desire to attain a love tantamount to his, a violent rape that shames her parents and leaves Sarah without a home, hundreds of sexual partners, the gentle companionship of her friend and lover Jamie Wilkes, and the startling return of Mr. Carr.

In this "novel of formation," Maguire's characterization of Sarah is that of an accomplished novelist. Sarah is a borderline genius-a witty, self-aware, incredibly intelligent character with a righteous view of her sexual desires. Yet, rather than evolve into maturity, she moves like a cyclical hedonist, voraciously fulfilling her appetite again and again. To Sarah, "fucking is poetry unbound," and it "made words superfluous." The story seeps in complexity and mystery-from ceaseless sexual pursuits to the paradox of Mr. Carr.

Jamie Wilkes enters as the hero, the voice of reason. Yet he is also a tortured soul smitten with Sarah. During sex, Sarah rationalizes their differences: "You're a nurturer, Jamie. Fatherhood is what you were built for. I, on the other hand, was built for this." Through their friendship, we see Sarah's desire to "tame the beast" within. We almost glimpse it-but it quickly fades. She is the friend who cannot be helped.

Maguire's incorporation of literary influences-Bovary, Shakespeare, Dickinson, House of Mirth-is strategic, though far from subtle. During one of their school-ground sexual episodes, Carr exclaims, "imagine ... if Donne had not loved his young student ... what a loss to Western culture ... a tragic, tragic loss ...." Think it trite or enticing, Sarah's accompaniment to the definition of "true love" is a sensuous attraction to the literary. "If there was anything in the history of literature more erotic than the moment with Jane [Eyre] kisses Rochester's blinded eyes, she had yet to come across it." At times, this literary element exceeds our capacity to take such a relationship seriously, but can we fairly judge the love of two as we sit outside the chaos?

Emily Maguire is the author of Taming the Beast and The Gospel According to Luke. Her articles on sex, religion, culture and literature have been published in newspapers and magazines including The Observer, The Sydney Morning Herald and The Financial Review. She has an MA in English Literature and divides her time between teaching English and writing.

Erika Imberti holds a B.A. in Journalism and English Literature from Rutgers and is currently mastering the art of freelance living. She is a voracious photographer, travels on a whim, and was once awarded a trip to Switzerland for her writing. Her favorite writer is Anais Nin. To contact Erika e-mail: erika@kgbbar.com.