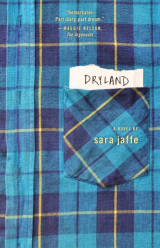 Fifteen-year-old Julie Winter is a typical teen, but Sara Jaffe's careful presentation of her coming of age in Dryland (Tin House Books) lavishes it with such loving attention to detail that it glows with a particularity that will be recognizable to former teens everywhere. Who to have a crush on and which after-school activity to pursue can seem like trivial problems, but while they may be ubiquitous they also represent the first time that an identity is there to be selected like a change of clothes. Jaffe catches Julie at a turning point, poised on the edge but too uncertain to move forward.At the instigation of her childhood best friend Erika, most of her free time is spent clipping out photos in yearbook class and walking the stalls of Portland's River Market while Erika fruitlessly tries to enlist Julie in determining which skater boy is the cutest. Julie's own interests are held closer to her chest. The younger sister of a formerly nationally ranked swimmer who now lives abroad and hardly ever calls home, Julie stares at the swimming magazines on display in a local news shop but never buys them, and apart from Erika, her only other activities are watching L.A. Law with her parents and listening to R.E.M.'s “Country Feedback”. Things change when Alexis, the blonde co-head of the yearbook and swim team captain, approaches her. She sidles over to Julie during yearbook to sound out her interest in doing photography for the club, inspiring Julie to dig her dad's old camera out of the basement despite never feeling inclined to try it out before.Alexis's reason for talking to Julie becomes clearer the next time they speak when she sounds out Julie's interest in joining the swim team, surely due to her brother's winning legacy and brief brush with Olympic fame. Too awestruck to question the motive, Julie buys a new swimsuit and joins the team without informing her parents and only reluctantly telling Erika, who insists on joining too. Incapable of properly focusing her attention on any of the boys Erika suggests as cute or hot, not even the older Ben, a former friend of her brothers who works at the magazine store, Julie has no problem at all fixating on Alexis. Despite Julie's struggling in the pool, the dual attraction of getting closer to Alexis and communing with her brother's past life keep her going to practices. Erika comes to seem mainly an impediment to the possibility of spending more time with Alexis, who seems perfect to Julie: how she wears the swim team sweatshirt, the smell of her brand of conditioner, her suggestion of distributing special signing pens with the yearbook. Once Julie's growing obsession with Alexis blooms into a genuine, if furtive, flirtation after they finally kiss at a swim meet party, her inability to share what is happening with someone else leaves her even further adrift. It's the early 1990s, when the most visible aspect of gay culture is the AIDS epidemic, and Julie shies away from thinking about what her attraction to Alexis might signify. Ben is the only one with a window into her experience after Julie learns that he is gay—as is her brother, apparently. When Alexis shies away from further engaging with Julie and even makes out with her female co-captain at another party as a dare, and Erika continues down her own path of exploration with boys, where Julie will go next is unclear. But isn't that the ultimate feeling of adolescence, a stranded sense of isolation, a dim awareness of some nascent identity trapped inside of you, and many a blank chapter ahead? Jaffe captures this in a perfect time capsule of an age when cassette tapes ruled and personal phone extensions were the closest thing to a smart phone but when growing up was still no easier than it is today.Sara Jaffe's short fiction and criticism have appeared in publications including Fence, Paul Revere's Horse, matchbook, and The Los Angeles Review of Books. She co-edited The Art of Touring (Yeti, 2009), an anthology of writing and visual art by musicians drawing on her experience as guitarist for post-punk band Erase Errata. Sara holds a BA from Wesleyan University and an MFA from the University of Massachusetts Amherst. She lives in Portland, OR and is also co-founding editor of New Herring Press, a publisher of prose chapbooks.