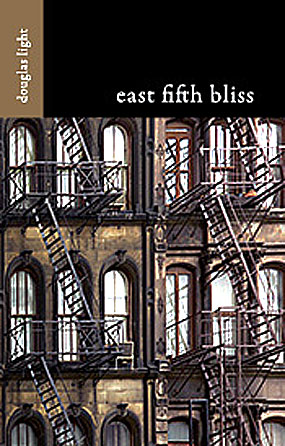 In a city where housing projects and luxury day spas coexist, and young hipsters awash in bling rub elbows with old immigrants held together by support hose, Douglas Light conjures up a mixed-bag of characters - sex-addled teens, love-starved focus group leaders, borderline bounty hunters, and socialite squatters - using them as wrecking balls to pulverize the well-constructed emotional walls that have bound Morris Bliss, the protagonist of his debut novel, East Fifth Bliss, in frustrating inertia for the full thirty-five years of his life.

Sharing an apartment with his widowed father in New York City's Lower East Side, Bliss dreams of travel to faraway places. But he's broke and unemployed, without tangible means to achieve this goal. Furthermore, the mysterious abandonment and sudden death of his mother (a daughter of Greek immigrants) when he was a child acts as a psychological anchor, mooring him to his familial origins. Enter Stefani, a sexually precocious eighteen-year-old parochial school student, who seduces Morris then asks him to her prom. This unexpected jolt to his libido and conscience is the first in a series of random (yet interconnected) soul-baring experiences that draw out his suppressed angst, leaving him open and vulnerable enough to try out the life he always desired.

Light's prose is careful, rhythmic, and economic; he deftly uses the weight of one sentence as a pendulum to push forward the next. The result is a style that mirrors, and serves to create, the transformation of Morris Bliss. Light has the mind of the habituate observer, one with the requisite patience and curiosity to unearth the subconscious motivations behind exterior eccentricities. Take, for example, N.J., Morris Bliss's best friend since childhood. On the surface, N.J. is a fast-talking egoist, a Don Juan in need of Ritalin, who flits from paramour to paramour. The tragedy, of course, is that N.J. is oblivious to his own bluff, but Morris sees his friend's mania for what it is, the same affliction he faces: a fear to grow up, to take on responsibility, to become an adult.

The introduction of N.J. also gives sample to the sardonic humor and dialogue dusted with tension and levity that pervades East Fifth Bliss. "A week can be a long time," N.J. rationalizes to Morris, explaining how he could get married after just meeting someone. "Rome was ravaged in less time. The Seven-Day War changed the landscape of the Middle East. A lot can happen in a week, man." Morris replies dryly, "A lot of destruction, you mean. And it was the Six-Day War that happened in the Middle East."

Overall, East Fifth Bliss is an easy read, with bouts of slapstick dangled around heavy themes. The novel comes across as Catcher in the Rye meets Ghost World, a coming of age tale about someone who should have come of age long before. The naá¯ve cynicism of Bliss allows Light to place him in situations we might otherwise question. But by throwing him into the fray, he is able to pull him out again, leaving a piece of his old self behind with each encounter. In this regard, East Fifth Bliss, as a post 9/11 tale, touches on the City's communal experience of loss and revitalization. One almost wishes Light made more direct mention of the City's wounds and healing process, but the book is solid in its subconscious portholes, providing readers with many entrances into deeper exploration.