DAYS IN THE HISTORY OF SILENCE by Merethe Lindstrøm 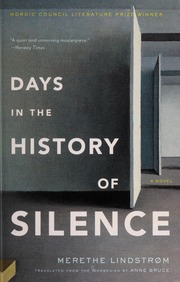 From the beginning there is a mood of claustrophobia and stifled, unaired rooms in Merethe Lindstrøm's prize-winning novel, Days in the History of Silence (Other Press). The story opens with an unnamed intruder on the doorstep of Eva and Simon's home, a young man who appears suddenly and is let in after asking to use the phone. Eva narrates his visit from a vantage point decades later, recalling how she was home with her young daughters when the young man walked over her doorstep and then disappeared briefly with one of the girls. A short, unexplained episode with no dire consequences to Eva or her daughters, it still introduces an aura of dim threat that lingers without taking firm definition. Indeed much is hazy in Eva and Simon's life. While their day-to-day world is described in careful and attentive prose, details about the past are as murky and undefined as the visit of the intruder remains. Now retired with an empty nest, their house seems more abandoned showroom than home. Simon is suffering from some form of dementia and has stopped speaking, occasionally disappearing to walk aimlessly on the streets. Yet the silence of the title is more than the result of Simon's withdrawal into himself. Years of denying the past have taken their toll and Eva is so deeply encased in her avoidance of the past that the reader, too, can at times feel as closed out as Eva and Simon's grown, and somewhat distant, daughters. Shutting out the ghosts of their histories has given their existence a shadowy alter ego, lurking unacknowledged but close enough to cast a pall; the denial keeps their present from coming fully alive. Eva's own understanding of what is wrong is vague:

I wake all of a sudden. I must have dozed off in the chair here, and now I have that heavy feeling I sometimes get when I drop off during the afternoon, as though something existential, fundamental, has risen to the surface and lies just below, about to reach my consciousness. But the only thing I feel is sadness. And I can't manage to grasp what was so clear to me as I was on the verge of waking, though there is nothing I can do about it, no way to make it disappear again.

Loss is the prevailing note. There is the absence of Simon's speech, which Eva resents as if it were a choice rather than the product of a medical condition, as well as the recent dismissal of their cleaning maid Marija from the household. Long accustomed to being alone, taking on a housekeeper is the idea of Eva and Simon's daughters; after the couple finally yields to the request, they find that Marija steps into an empty gap in their life. She becomes part of the family, even attending Eva's birthday outing to the philharmonic, so enmeshed in their lives that when Eva and Simon end her employment their adult children are angered. Refused an explanation for the split, as indeed the reader is, they go so far as to boycott a wedding anniversary celebration planned with loving care by Eva and Simon. Deeply hurt by the intentional snub, Eva still does not reveal the incident that precipitated Marija's firing. She reflects:

I could phone them, say that I thought it was unfair, but in a way they had a right, I thought, to such anger. After all we had held back from them throughout the years, not only about Marija, but all the other things too. As if we had been lying.

These “other things” include Simon's Jewish heritage and the fate of his extended family in the Holocaust. Nearly all of his relatives met their death in Nazi camps while Simon, his brother and parents hid in a cramped hiding place. Simon wishes to tell their daughters about this family past of which they know nothing, but Eva balks at exposing them to such awful facts even once the girls are realistically old enough to be informed. Eva does not even wish Simon to use the existing survivor networks to search for the possible existence of a long-lost aunt and cousin, though he does reach out to various organizations for assistance. In the end he never tells their children, and in Eva's mind this silence, which she was complicit in, is bound inextricably to Simon's inability to speak now in any capacity. It is not only his secrets that have festered, but hers too, the existence of a half-brother to their daughters, conceived when Eva was a teenager and given away for adoption as an infant after several months of reluctant, begrudging mothering. Eva only tells Simon of this child after they have been together for years, thinking of him matter-of-factly, without much emotion. This coldness appalls Simon, yet neither seems able to escape from their hermetic care of these secrets. The fissures are subtle but pervasive. While claiming to feel no remorse over her abandoned infant, Eva is drawn to the gravestone of a man who died young and would have been the same age as her son. Her walks in the neighborhood gravitate to the churchyard where he is buried, apparently unattended by any loved ones. To make up for the disregard, Eva tends the plot, while forging a quiet bond with the clergyman at the church. Despite professing no faith, Eva seeks out the clergyman, searching for forgiveness of her guilt. And while keeping the history of Simon's family under wraps, when Marijda's offense is revealed it provides proof that his past continues to be honored in its own way: she is told not to return to work after expressing extremely anti-Semitic views. And yet it is not enough to honor the past in these subterranean ways, the novel tells us. The extreme isolation they impose on themselves through repressing the truth, turning away from openness at each turn, has a high toll. It is as if they have led a sterilized life, even though both had successful careers with a range of diversions. To Eva alone in the house with Simon, without their children, without Marijda, the current wordless regime must seem like a fitting punishment for their past reticence. Merethe Lindstrá¸m is the Norwegian author of the novel The Stone Collectors (1996) the short story collection The Guests (2008) among many others. Anne Bruce has translated many contemporary works of Norwegian literature including Blessed are Those Who Thirst by Anne Holt. Bruce has degrees in Norwegian and English from Glasgow University.