DAVAI! The Russians and Their Vodka by Edwin Trommelen. Translated by David Stephenson. 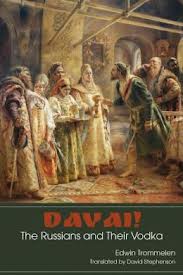 Edwin Trommelen's Davai! The Russians and Their Vodka (Russian Life Books) is as comprehensive a book as one could hope to find on the six-hundred year love/hate affair between Russia and vodka, the sacred and profane ‘little water,' a name which almost seems to denote personal affection – “my little water.” From Hungary's Unicum to Japan's sake, most every country or region has its own alcoholic beverage. However, no other nation's relationship to its drink of choice has perhaps been so passionate, so fraught, or held such an all-consuming hold on the collective conscious. In the centuries that Russians have been drinking the stuff, vodka has permeated its various arts, literature, government, and day-to-day life...almost no thread in the fabric of its culture has gone untouched. (On a personal note, when a friend of mine in high school went to Russia as part of an art exchange program, they claimed that the batons their two military escorts carried secretly doubled as flasks.)In Davai!, Trommelen examines each of those threads to show how the cloth was made. It quotes extensively from dozens, if not hundreds, of sources (in both English and Russian, delightfully), putting those sources in a dialog together while confidently guiding the reader through that conversation, and what it all means. The chapters are divided by subject matter, starting with the basics via ‘What is Vodka?', moving on through the big-picture matters such as ‘Vodka on Life's Journey,' ‘Everybody Drinks,' and ‘Religion,' before finishing up with helpful nuts-and-bolts concerns like varieties of vodka and what to eat with them.To the extent that the book aims to be all-encompassing, its drive is not primarily narrative, but more instructive. Stories and anecdotes abound, but the focus is just as much on informing as it is on entertaining. The book can be, at times, even a helpful resource for travelers, such as when discussing the various ways to say “cheers”:


You can also simply say “to your health”: “Za (vashe) zdorovye [pronounced zdarívye]. The increasingly commonplace na zdorovye is technically incorrect, but any Russian will understand and not be insulted (part of the confusion comes from the fact that Czechs and Poles, for example, drink na rather than za something).Another way to make an impression is to shout “Poyekhali”...(“Here we go!”) after glasses have been clinked. Yuri Gagarin, the first man in space and a lover of drink, uttered that now-common expression right before he was shot in to space on April 12, 1961.

And you thought it was just the latest lame slogan for Bud Light. For all the centuries of fascinating history the book surveys, its also interesting to consider how the fire isn't anywhere close to burning out. Davai! looks at a few more recent public and political figures in Russia, such as Boris Yeltsin:


There are countless anecdotes about official occasions where Yeltsin was obviously under the influence: during a one-on-one with Bill Clinton, for example, or the time he missed an appointment in Ireland because he was sitting drunk in the airplane at Shannon Airport and refused to come out. His vice president, Alexander Rutskoy, was once accused of being in a “permanent state of visiting Ireland.”

Looking over the 20th century, the book considers the general state of vodka during the wars and under communism, and how it fared under Lenin, Stalin, and their successors. While there was much promotion of temperance during the Soviet era, there was no suppressing vodka's unshakeable economic power. Alcoholism seems to have increased on a national level in the second half of the century, leading to some staggering statistics:


In the early 1960's, families on average spent one-fifth of their income on alcohol. Those who were less well off spent comparatively more: up to 40%.

Vodka was also a crucial export: “Upon [Leonid] Brezhnev's death in 1982, income from vodka sales accounted for one-third of the national budget.”Such sweeping statistics can at times be difficult to wrap one's head around, let alone relate to, perhaps especially for an American. Fortunately, Davai! is aimed at outsiders looking to understand, appreciate, and wonder at the impact one little drink has had on the largest nation the world has known. ABOUT THE AUTHOR: Documentary filmmaker and author Edwin Trommelen is a life-long Russophile, an inveterate plumber of the mysterious Russian soul, and, of course, a lover of vodka. He spent decades researching this culturally-laden drink and has now generously poured all that he learned into this – quite possibly the most thorough literary and historical compendium of the world's most popular spirit.ABOUT THE TRANSLATOR: A native of Charlotte, N.C., David Stephenson earned a Bachelor of Arts in German and Russian from the University of North Carolina at Chapel Hill and also studied modern languages, history, and sociology at the Heinrich Heine University in Dísseldorf, Germany. He has been an independent translator and ATA member since 1983 and holds ATA certification in Dutch to English, German to English, and Croatian to English.