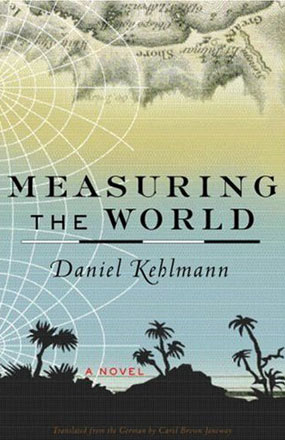 Pantheon, November 2006
272 pages, $23.00
Daniel Kehlmann's Measuring the World, which was on the German bestseller list for over a year, is a rich and comic novel that will reward the readers who keep with it. The book feels much more dense than its 259 pages, although not necessarily due to the author's writing style-which is Carol Janeway's brisk and stern translation-but to the larger themes that Kehlmann is concerned with.

The book follows the lives of two very different scientists. The first is Carl Fredrich Gauss, a reclusive and curmudgeonly mathematical genius who at twenty-one published a treatise on number theory. He is recognized as the greatest mathematical brain since Newton. The second is the Prussian aristocrat Alexander von Humboldt, who is known to history as the second Columbus. Alternating chapter by chapter, the novel follows Gauss's life and career in Germany and Humboldt's travels through Mexico, Colombia, Cuba, the United States and the districts bordering on the Orinoco and Amazon with his companion, botanist Aime Bonpland. Together, they attempt to measure plant species, geographical distances, and even climate.

Much is made out of Gauss's indifference toward the outside world, which is initially endearing, but grows tiresome towards the book's end. Work, war, and especially other people (particularly, his own children) are mere distractions-this is a man who jumps out of bed on his wedding night to jot down a mathematical formula.

Kehlmann also devotes much time to chronicling Gauss's hyper-logic and lack of tact to comic effect. When contemplating a more lucrative job offer, Gauss frustratingly informs his wife that he sees no reason why he shouldn't agree to work for a territory now occupied by Napoleon since, obviously, "looked at from the future, both sides would cancel each other out." Later, he flatly tells Bonpland's brother, a linguist, whom he encounters at the theater that: "Linguistics [is] for people who had the precision for mathematics but not the intelligence. People who would invent their own makeshift logic." Needless to say, Bonpland's brother does not appreciate Gauss's honesty.

Although some of these jokes eventually begin to fall flat, Kehlmann raises some interesting points about genius without hitting the reader over the head. Gauss does great things but is not exactly a great man. It is to Kehlmann's credit that the reader ends up sympathizing with Gauss despite his distaste towards almost everything except mathematics.

However, it is Humboldt's storyline that is the real star of the book. Action-packed and described in a way that blends Greek myth with magical realism, Humboldt's adventures, unlike Gauss's, are purely enjoyable to read. As Humboldt and Bonpland grow increasingly weary from the difficult journey by boat down the Orinocos-encountering nasty, life-sucking mosquitoes, a river of corpses, village people who roast small children, and the constant sounds of monkeys' rattling cages-the narrative reaches an intoxicating delirium. And throughout, Humboldt's relationship with Bonpland, whose fate is to remain largely forgotten by history, is particularly affecting. In many ways, the novel is as much about their parallel stories as it is about that of Gauss and Humboldt.

Although the narrative loses energy in the end and the novel feels distinctly German, concerned with Germany's past and filled with inside jokes that an American may miss, Measuring the World is a rich and rewarding read that marks the American debut of a young international talent. Refreshingly, at thirty-one, Kehlmann's writing is almost devoid of the showboating and acrobatics of most of the young writers that make waves in America. This is an assured and graceful novel whose pleasures are deep and lasting.

Daniel Kehlmann was born in Munich and attended a Jesuit college in Vienna. He has won severl awards for previous novels and short stories, most recently the 2005 Candide Award. His works have been translated into more than twenty languages. Measuring the World became an instant best seller in several European countries. Kehlmann is spent the Fall of 2006 as writer-in-residence at New York University's Deutsches Haus. He lives in Vienna.

Jennifer Bassett is a writer living in New York. She received a B.A. from
Columbia University and a M.A. from NYU. She works in book publishing, is
associate editor for the literary magazine, Swink, and plays keyboard in the
band The Eliza Battle.