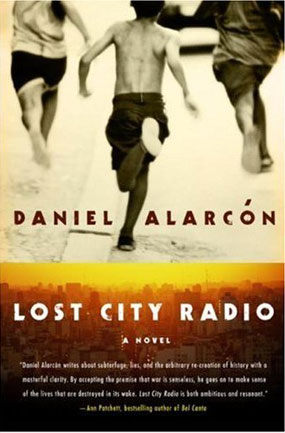 Harper Collins, January 2007
272 pages, $24.95
Place was paramount in Daniel Alarcon's 2005 short story collection, War by Candlelight. Whether imprisoned in a Peruvian jail or window shopping on 125th Street in East Harlem, a character's orientation in place and time was central to the story. Take, for example, Alarcon's fourth piece in the collection, "Lima, Peru, July 28, 1979"-the pinnacle of specificity.

That precision is gone in Alarcon's gripping debut novel, Lost City Radio, which takes place in an unidentified South American country at an undisclosed time. Towns are referred to not by names but by government-assigned numbers: 1797, 1791. A war that ravaged the country a decade before has left citizens still seeking their lost-those who left home to fight and never returned, and those who were dragged off by the government. A radio program, "Lost City Radio," airs Sunday evenings, and, in a manner reminiscent of the sea of "have you seen this person" posters that flooded Manhattan in the wake of 9/11, people call in to advertise for their missing.

Norma, the show's supple-voiced host, acts as the emcee, but she, too, is missing someone: her husband, Rey. A professor and scientist, Rey secretly worked for the resistance before being arrested by the government. While reuniting families with their loved ones, Norma grieves for the uncertain fate of her husband. Yet she refuses to use the radio show to advertise her own loss: "If I said his name again, it would be admitting I still thought he might hear me. I'm not sure if I can take that."

But then one day, Victor, a recently-orphaned eleven-year-old from a jungle village, appears at the radio station with a list of the missing for Norma to read on the show. Norma is shocked to see Rey's known alias on the list. With Victor entrusted to her care, Norma chips away at the possible connections between this orphan and her husband.

Alarcon's narrative echoes the sense of disorientation experienced by all citizens of this nameless nation. The structure of the novel shakes readers from their sense of time; scenes from a decade earlier are interwoven with the present, creating a stichomythic patter of the collision between the past and present. Numbered cities mesh together in the reader's mind, and Alarcon uses the anonymity of place to underscore the universality of human nature: "The mothers were desperate that their children stay, because mothers are the same everywhere." But even the reason for the war itself is vague. Rey can't remember what started it all: "Someone was angry about something. This someone convinced many hundreds and then many thousands more that their collective anger meant something."

In his debut novel, the Peruvian-American Alarcon (who lived in Peru until age three and returned on a Fulbright in 2004) adroitly takes up the mission he began in his short story collection: chronicling the conflicts-both political and private-that rage for all of us.

Daniel Alarcín's fiction and nonfiction have been published in The New Yorker, Harper's, Virginia Quarterly Review, Salon, Eyeshot and elsewhere, and anthologized in Best American Non-Required Reading 2004 and 2005. He is Associate Editor of Etiqueta Negra, an award-winning monthly magazine based in his native Lima, Peru. A former Fulbright Scholar to Peru and the recipient of a Whiting Award for 2004, he lives in Oakland, California, where he is the Distinguished Visiting Writer at Mills College. His story collection, War by Candlelight, was a finalist for the 2006 PEN/Hemingway Foundation Award.

Iris Blasi is a writer and editor in New York City. She has written for, among others, New York Magazine, The Forward and Publishers Weekly. She lives in the East Village.