Putting aside its kitsch and recent surge in popularity, the spy genre can be engrossing and worthwhile if it is innovative. If it rests on a muddled mix of clichés, as Joshua Sobol's novel Cut Throat Dog does, the result is less suspenseful than a cookbook. 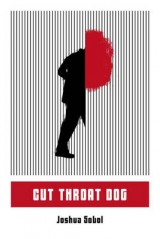 Putting aside its kitsch and recent surge in popularity, the spy genre can be engrossing and worthwhile if it is innovative. If it rests on a muddled mix of clichés, as Joshua Sobol's novel Cut Throat Dog does, the result is less suspenseful than a cookbook. Cut Throat Dog tells the story of a middle-aged Israeli operative turned marketing exec, Hanina Regev. Inside a tough exterior, Hanina imagines himself a poet, calls himself Shakespeare, and fantasizes heavily during his daily life. The novel begins when he believes he recognizes a man who killed a member of his unit years ago. The man had been reported dead, but Hanina sets out to identify him with the vague intention of confronting him. His search soon leads him to Winnie, a prostitute with whom he begins a sexless relationship. The novel backtracks to scenes from the unit's operations, sidetracks to Hanina's relationship with Winnie, and flies off the tracks with mutiny at the ad agency. One element holds the story loosely together: Hanina's clear-thinking confidant, Yadanuga. But this small voice of reason fails to provide the cluttered, floating tale with the grounding to support building interest or mystery. The fixedness Yadanuga imparts instead flattens the story. He declares outright that Hanina is “someone for whom imagination is reality and reality is imagination,” and voices the novel's challenge to “go figure what happened in reality, what happened in imagination, and what happened in the no-man's-land between the two, where this man lives his life.” It is the amount of cliché, rather than craft, that makes it difficult to distinguish Hanina's fantasy from the novel's reality. Perhaps Hanina has imagined Winnie and her stock story of turning to prostitution after sexual abuse. Other characters doubt her existence as well, though their own stories are no less tired. Nothing in the novel rings true or false or is surprising enough to be judged either way.Hanina himself is one of the novel's central weaknesses. He tells Yadanuga:

When I try to think about myself, I can only think in fragments, splinters, broken bits and pieces. I can only give you fragments.

There comes a moment when a man is a broken vessel, and any well-constructed story is a complete lie. Give me fragments of truth and don't sell me a well-told lie with a beginning, middle, and an end.

The problem here is that Hanina is so formulaic that the reader can easily fill him in. Hanina is tough, but he's soft; he's seeing a prostitute, but they don't have sex; he explains himself, but inconsistently. What Sobol creates in Hanina is not an array of compelling fragments but a few obvious contradictions. The stylistic elements of Cut Throat Dog are as unsophisticated. There is a clumsy emphasis on names, nicknaming, and renaming. Hanina puts forth the idea that “a person is matter that can take on any attribute...[e]very new meeting creates a new person, who didn't exist until that moment” – and, upon meeting Hanina, for instance, Winnie renames herself Melissa, and later Timberlake. But the characters give new names to themselves, aspects of themselves, and one another so frequently that it becomes heavy-handed, and finally distracting. Meanwhile, seemingly slick juxtapositions between chapters only further obscure any distinction between fantasy and reality. Chapter 51 ends with Yadanuga asking Hanina:

It's a story about what happens between two people who love each other, says Timberlake as she leans forward over the table, on the terrace of a seafood restaurant on the banks of the Indian River.

Sobol's use of this trick becomes more than a matter of taste at the story's climax, where it debuts as a grand technical problem. In the novel's decisive chapters, we can't be sure whether Hanina envisions his actions or they really take place. More troublingly, it is difficult to determine whether this vagueness is intentional or results from Sobol's imprecision.So much is unclear that there's no way to know what's important in the novel. When that is as uncertain as everything else, how can Cut Throat Dog keep our interest?

Joshua Sobol is an Israeli playwright, novelist, and theater director. Cut Throat Dog is his first novel to be published in English.