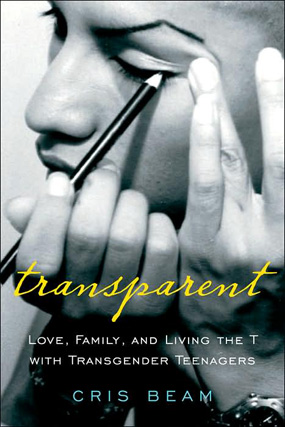 Harcourt, January 2007
336 pages, $25.00
In her author's note Cris Beam is careful to point out that her book is not intended to represent the transgender community as a whole. Although Transparent is salted with facts about the historic and legal status of transpeople in America, it's really about four particular trans kids, the ones Beam happened to run into and get to know. By focusing her narrative on the lives of Foxxjazzell, Ariel, Christina, and Domineque, Beam crafts the kind of reported story that earns its power from personal details.

But this is not a reporter's story, exactly. Beam stumbles into her subject when she decides to volunteer at a Los Angeles school for disadvantaged gay and transgender teens; although most volunteers at the poorly-run establishment quit after a few months, Beam sticks around, partially to teach a writing class and partially to learn more about the kids she meets. Most of them have been rejected by their families because of their transgender status, and they're surviving on their own. The city of Los Angeles - where strip malls and big dreams lie side by side - is a potent backdrop for these kids' lives, and we learn of their pasts as gang members, their struggles for identity, their quests for hormones (legal or not), and the oppressive juvenile systems that are more hurtful than helpful. At the same time, the kids are resilient, hilarious and perceptive. "Real women can have a little something extra between their legs if they want to," jokes Foxxjazzell, who opts against sex reassignment surgery.

As the book progresses Beam's life becomes inextricably entwined with that of her primary subject, Christina, a gale-force kid who desperately needs the stability and love she never found in group homes. After Christina is thrown out of her juvenile home a few months before her eighteenth birthday, Beam takes her in. This is when Transparent takes a transcendent turn: Cris Beam the intrepid narrator makes room for Cris Beam, sudden kind-of parent.

Watching Beam and her ever-patient partner Robin make Christina part of their family is at once suspenseful and gratifying. They navigate the bureaucratic maze of social services; they deal with Christina's brushes with the law; they even try to forge a connection with Christina's birth mother, who mostly isn't interested. The moments that will resonate with all parents ("I am not going out with you dressed like that!") are more loaded than usual; to Beam's dismay, Christina has started turning tricks with the other kids on Santa Monica Boulevard. And when Christina meets a cute guy, it's not just another girl-meets-boy story.

As a writer and as a parent figure Beam is utterly tenacious. Despite the book's eloquence, she never pretends to have more answers than questions. At one point, all she can do is sit on the floor and cry, overcome with helplessness and rage. She gets up and goes on, but there is no pat resolution. In the end there's just an intimate moment between Cris, Christina and Robin, and as Emily Dickinson would say, the thing with feathers - hope.

Cris Beam is a journalist who has written for several national magazines as well as for public radio. She has an MFA in nonfiction from Columbia University and teaches creative writing at Columbia and the New School. She lives in New York.

Mary Phillips-Sandy is the editor of Ruined Music. Her writing has appeared in Bust, Encore, Yankee Pot Roast, asap @ the Associated Press, Monkeybicycle, and other publications online and off. She also performs with DraculaZombieUSA East Coast Annex.