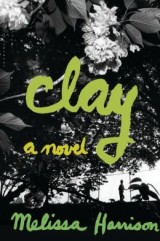 Going in to Melissa Harrison's debut novel, Clay (Bloomsbury), it helps to understand the extent to which the focus of the book comes from the author's own personal perspective. Harrison grew up in a very verdant area of Britain, and, upon later moving to a tree-less neighborhood in London after college, soon enough realized how important the presence of greenery was to her well being. Personally speaking, as a transplant from the "Evergreen State" of Washington (Seattle, but still), the feeling is relatable. How much Clay ultimately resonates with a given reader will likely depend on whether they share the same feelings for flora as well.Much of the story is told in scenes that read like the equivalent of zoomed-out panning shots, taking in so much of the landscape that the central characters are but one part of the picture. Only periodically does the camera come in close enough to show the lines on their faces, gauge their expressions, and feel their intentions. Think of Andrei Tarkovsky's The Sacrifice. Each chapter begins by building its atmosphere through landscape in vibrant and nuanced scene-setting:

For the first time that summer the Perseids darted like tracer fire, faint and intermittent, above the city all night. When the sky eventually lightened it revealed dew, heavy on the dry, dead grass of the little park. The blades hung, jeweled and still and briefly silver, draped between with a thousand tiny webs that caught and held the dew as a jeweller's cloth does diamonds. Then, as the sun rose above the roofs of the Plestor Estate and the dawn sky slowly deepened to blue, the light illuminated the grey-veiled grass, and within ten minutes or so it was dry.

Vivid, lovely passages such as that abound in Clay, where nature is a constant presence, not simply a backdrop. The narrative feels like a refreshing turn away from the more frivolous trappings of modernity. Questions of verisimilitude don't arise with the novel's external world, but from time to time the internal worlds of some characters can be more believable than others. There are two relationships that comprise the human drama of the novel. There is Sophia, a septuagenarian widow who seeks to share her love of nature with her granddaughter, Daisy. Then there is TC, an eight-year-old with a penchant for school truancy, who gradually befriends a man in his mid-forties named Jozef, who can't mentally separate himself from the farm life he left behind in Poland. Jozef and Sophia's appreciation for the natural world doesn't attract any doubt, but how exactly TC, who has only known the city in his short life, came to acquire his all-encompassing fixation with green space, specifically the small city park that he spends so much of his time alone in, is less apparent. His quietly tragic home life, with a resentful young divorced mother, Kelly, who seems to care less for TC than her boyfriend of the moment, makes his desire for escape understandable, a necessary coping mechanism. Less obvious is why he looks for that escape in a secret garden in the aforementioned local park, as opposed to the more typical outlets for city kids.This is perhaps partly due to the reader only being occasionally brought in to the thought processes of the characters. From time to time we do see in to TC's internal workings, such as when he finds the tracks of a mystery animal, in a passage that, as it helps to illuminate TC's motives, portrays a startling awareness for a child of only eight years:

He felt a shiver of excitement at the thought that something lonely and wild lived somewhere near him, something that nobody else knew about. Perhaps he could make friends with it. No, he knew that wasn't possible. But perhaps it would come to know that he didn't mean it any harm. He could put food out, if only he could be sure what it was and what it would want to eat. It would learn to trust him, after a while. No one else would be able to go near it; it would only allow him and nobody else, not even police or zookeepers. It would be the two of them, out there together in the forgotten, wild corners of the city, and perhaps one day he would rescue it from something. Or it would rescue him.

As Clay slowly builds, the final scenes, particularly with TC and Jozef, hit their mark more and more successfully, and the conflict between the realms of concrete and soil come more clearly in to focus. After the purity of TC's park is tainted by a horrific incident he's forced to silently witness, the clouded judgments of urban suspiciousness finally kill his friendship with Jozef, which was grounded in a pure appreciation of nature. The only flicker of optimism between the two comes from TC's mother Kelly finally ceding care of her son to his estranged father, who has been by far the biggest missing piece in his life. As TC is being driven to go move in with his father, “on the back seat a PlayStation, nearly new, shifted and slid, shifted and slid.” As he swaps mother for father, his obsession with mother earth is swapped for the trappings of modern childhood. Melissa Harrison is a freelance writer and photographer whose clients include the Guardian. She was the winner of the John Muir Trust's 'Wild Writing' Award in 2010, and Clay is her debut novel. She lives in South London and writes about her local environment on her website, Tales of the City.http://www.talesofthecity.co.uk/